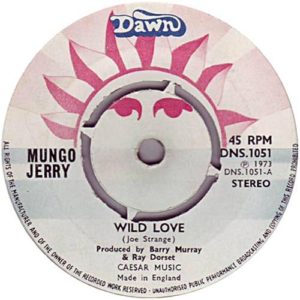 As Angel Child, it made the hairs stand up on the back of my neck when I first heard it at the Black Swan in Sheffield. It still does!

Not as big a hit, it still made it into the singles chart at 32, despite receiving little or no radio play.

“When we were requested to do another Top Of The Pops, Harry Simmonds demanded a higher fee than the BBC normally paid. We were told that unless we were in the top ten with our follow up we would not get to be on the show with it.

“Also, this was at a time when because of a strike only one music paper got to be published. It happened to be the one where we were lower in the chart”.

What this one does is stomp along, with the very likeable Ray Dorset doing his wild animalistic noises and vocal refrains out front for the customers.

It’ll hit the charts in a big way, but for me doesn’t have the same instant appeal of ‘Alright’ (three times over).

“A hit then…but not entirely my cup of ‘Rosie Jerry’.

Along with the bloke in Nazareth, Ray Dorset has one of the better scream voices, and this record has all the stops and starts and places for the crowd to join in that go to make a disco ’73 smash.

Ray Dorset hollers another hit from the depths of his hot rasping throat, while the band boogies – but gently.

Listen to the bouncing beat and tell me if it isn’t worth a set of silver tea spoons and treble stamps”.

The b-side of Wild Love was the rocking Glad I’m a Rocker. With Johnny Cook on piano, Bob Daisley on bass and the late Dave Bidwell on drums.

There are also two brand new DVD’s – 24 Days. A Mungo Jerry documentary filmed during a tour of mainly Germany in 2016 and a live performance from the Bansko Jazz Festival.