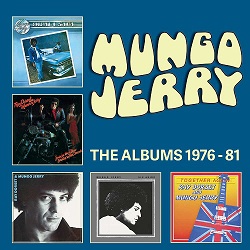 The Mungo Jerry singles 1975-81 were largely recorded for the Polydor label and although none charted in the UK, Ray had quite a lot of success in Europe and beyond…

Ray Dorset on the move to Polydor…“The management negotiated a good new deal with Polydor prior to the contract with Pye running out but, by the time the new deal had come in to operation, the people that my management had dealt with left the company to set up their own label.

“Punk was coming in and the A & R people at Polydor in England were not really very interested in the Mungo recordings, I think that they thought that we were past our sell by date, although Chris Parry did say to Freddie Hyaan the MD (Freddie used to manage the Dutch band, Golden Earring) that I wrote f*****g good rock songs”.

Click HERE for a review of the box set containing the…

CAN’T GET OVER LOVIN’ YOU

Mungo Jerry’s debut single for Polydor was Can’t Get Over Lovin’ You, released in the UK in a plain standard Polydor bag and was given little or no promotion and unsurprisingly didn’t chart.

Ray Dorset on the single…“This record was put out without thought of a picture sleeve and not much promotion but it was a hit in Denmark”.

MUNGO JERRY: CAN’T GET OVER LOVING YOU – (Polydor)…

“Vocal is everything on this relaxed, jog-pop record. Lead singer Ray Dorset sounds a bit Presley-ish at times. Hook line is given special emphasis and stays with you….HIT!

The follow-up to Can’t Get Over Lovin’ You was the summery, Hello Nadine, another Ray Dorset composition that despite not charting in the UK, was a big success abroad and remains particularly popular in France.

An earlier demo was recorded and has appeared on a subsequent compilation collection.

Ray Dorset on Hello Nadine…“We had already recorded what we thought would be the follow up single which was What’s Her Name, What’s Her Number but I had written Hello Nadine some time before in Athens on a bouzouki when I was there with the band before the Crow line up.

“Barry thought that this would make a good single and we recorded a version of it with Dave Wilkie on the piano just before he left the band to joining the ‘bogus’ Fleetwood Mac line up.

“Bob Daisley, Dick Middleton and Dave Bidwell were in the band at this time. We recorded the song again when Colin was back in the band and we were working at Nova Studios in London on what was to become the Impala Saga album. 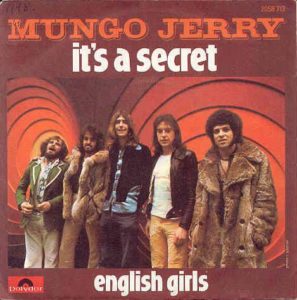 A non-UK release, It’s a Secret was another of those Polydor singles that made it big abroad, topping the charts in what was Zimbabwe (Rhodesia) and also doing particularly well in France.

British based fans were keen to get their hands on this one for their collections as the b-side, English Girls was only available on this single at the time.

Ray Dorset on It’s a Secret…“The people at the UK division of Polydor were now interested in being ultra hip and they only seemed to want Punk/New Wave, which It’s a Secret certainly was not. 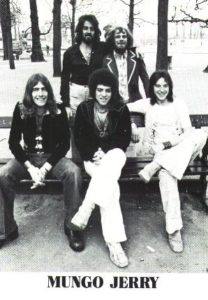 Radio 1 initially played the song several times – for ONE day – and it was described by Dave Lee Travis as “what a fantastic song” on his show, but this summery offering with Joe Rush’s washboard prominent captured perfectly, the feel and fun vibe this particular line-up had.

The a-side was backed by a superb piece of rockabilly on the flip side called Give Me Bop.

Ray Dorset on Don’t Let Go…“Don’t Let Go did get a lot of plays initially and went in to the UK charts at around number 65 but the record company failed to do any more work on it.

“This track was produced by the late Alan Blakely from The Tremeloes.

“I thought that it was a good recording, maybe it should have sounded happier.

Another great non-UK release written and recorded by Ray Dorset with session musicians became known amongst Mungo fans as ‘gypsy-rock’.

Many of these hard to find tracks such as Lana made their way on to a compilation album called Six-a-Side, a godsend for UK fans at the time who couldn’t buy the material at home.

Ray Dorset on Lana…“I really liked this recording. This was produced by my old friend Roberto Danova and he used the musicians that had been on the Cliff Richard and Olivia Newton John recordings, which he also did on the hit version of It’s a Secret and the other tracks that he produced with me for Polydor.

“Even the backing track of Lana sounds good and stands up on its own with no vocals”.

Taken from the Lovin’ In The Alleys, Fightin’ In The Streets album, this one featured Mick Eve from Gonzalez on saxophone.

Mungo Jerry has always excelled at rockabilly, Ray has a natural feel for it, and the b-side, That’s My Baby was another prime example of this.

This new single, or EP featured three tracks taken from the Lovin’ In The Alleys, Fightin’ In The Streets LP, the lead track All That a Woman Should Be also opened the album.

The other two tracks were Dragster Queen and, shorter than the album version, Get Down On Your Baby. The EP title was Mungo Rox.

Tracks: All That a Woman Should Be, Dragster Queen/Get Down On Your Baby.

Mungo explaining that his ‘jeans are the tightest’ and that ‘we are the coolest’. The fan club described the track as having a kind of football chant vibe.

The b-side was Let’s Make It from the Ray Dorset & Mungo Jerry album.

DANCIN’ IN THE STREET

Dancin’ In The Street, by Ray Dorset & Mungo Jerry was to be his last Polydor single.

The first 10,000 copies were to be issued in bright coloured vinyl in clear plastic sleeves with a limited edition of 12″ discs for promotion purposes.

Tracks: Dancin’ In The Street/Rockin’ On The Road.

The first single on Ray Dorset’s Satellite label was a nice piece of Pop, What’s Her Name, What’s Her Number backed by a superb rock’n roll, boogie track, Why D’You Lie To Me.

Released at the same time was Rollin’ & Strollin’ under the name of The Insiders who were basically the Mungo band playing ‘whole-hoggin rhythm and blues’ as the press ads proclaimed.

With Ray now was, Dick Middleton on guitar, Doug Ferguson on bass, and Boris Williams (later of The Cure) on drums.

Tracks: Rollin’ & Strollin’/She Had To Go. 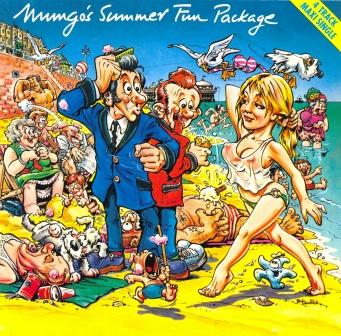 This one was most notable for the brilliant sleeve design by former Polydor art director Jo Mirowski who had designed Mungo’s Polydor album sleeves.

Summertime Holiday was to originally called ‘Seaside Holiday’. But after interest was shown in Germany, and thinking (incorrectly) that they don’t have any beaches, it was changed to reflect that.

Mungo Jerry’s reggae version of the Bob Dylan classic said to be the great man’s favourite rendition of his song.

The b-side was pretty tasty too, a slice of ‘Gypsy Rock’ called Hazel Eyes although the Dutch issue had Heart Of Fire from the Together Again album for the flip side.

Click HERE for a review of the box set.

“Through it’s release on a rock-a-billy compilation as Ray Dorset and The Rebels, I found out not so long ago that Give Me Bop (the b-side of Don’t Let Go) became a radio hit in some parts of Italy and Spain.

“Colin played the piano on both tracks but I don’t remember who else played on the recordings.

“The vocals and guitar on That’s My Baby were recorded at my home and Give Me Bop was recorded at Sunrise, an eight track studio in London.”

“I recorded some demos in my four track studio which was at the end of my garden, I also used to rehearse there with the band and they played on the tracks that I had already laid down.

“The songs were all in the blues style, we also recorded See You Later Alligator and Back Door Man.

I had an acetate of She Had To Go made and Pete Sullivan gave it to Mike Read who played it on his Radio One show, it was brilliant to hear a song that I recorded at the bottom of the garden using so little technology on national radio.

“We then decided that it would be good to play some club gigs for fun with a repertoire of Rhythm & Blues and I came up with the name The Insiders for the project utilising the history of the band members e.g. Boris Williams (Sadista Sisters, later The Cure), Doug Ferguson, (Camel), Dick Middleton, (Gene Vincent/Johnny Halliday), Colin Earl, (Foghat).