Once again, we are a bit sparse on the date/gig front in places but we are showing all we have for each individual year.. 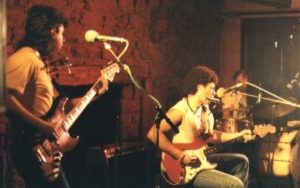 Ray Dorset said…“Joe invited me and the family over to France for the opening of a club in Quiberon, Mick Frampton decided to come along too.

“We played there and got invited to play at some more places, just Joe and myself, Mick joined in on some make shift percussion and a good time was had by all.

We then went on to do some busking in the bars and got invited back for the summer.

“Joe and I used to perform for about three hours with all kinds of jug band, skiffle, rock-a-billy and country music and even did versions of Satisfaction and Walk Of Life; this is how I came up with the song Red Leather & Chrome which the punters loved.

“We did this for a few years and even got booked for Bastille night in one town and also a theatre in Paris.

“Joe was a favourite with the audience, playing solos on their drinks trays and glasses, drinking beer onstage and making roll ups between and during numbers.

“He also has a thorough knowledge of blues and jazz and the ability to speed up, slow down and add many dynamics to his accompaniment”. 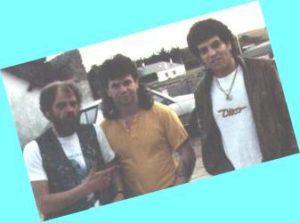 Mick Frampton said…“Ray invited me to France to holiday with him and his family, while there we were also to play as a jug band in the local pubs and clubs.

“This was the first time that I had met Joe Rush, the funniest man that I have ever met. Nobody else I know orders a beer over the microphone whilst Ray is singing.

“A typical day was spent on the beach, eating oysters and drinking sparkling cider.

“Driving to the gig at our leisure , arriving maybe three hours early (unknown for Dorset!), the owner would lay on food and drink and the atmosphere was casual and informal.

“If you have heard the tape of ‘Mungo In Brittany’ (track listing in the sidebar) you will hear that Ray made up many new songs on that tour, ‘Red Leather and Chrome’ springs to mind. It was brilliant”! 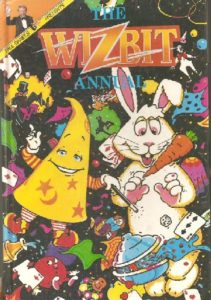 As British members will be aware, Wizbit the childrens TV show is currently being transmitted. Ray wrote three songs for the programme as well as having a hand in choosing the theme tune.

None of the songs by Ray have been released before, although he has recorded different versions of those that are used in the show. I hope soon to have news of an LP to be issued from the show.

Wizbit is very popular with young children, and kids are heard to be singing the theme tune, Ha Ha This-a-Way all over the country. Ha Ha This-a-Way is an old Leadbelly song that Ray recommended to Barry Murray, the shows producer.

You will remember that Barry is Mungo’s old producer from the old days. I have heard an old demo tape of Mungo doing Ha Ha This-a-Way and the sound takes you back to the 70’s.

Ray also has a solo single out in Germany called Next To Me.

A re-mixed LP of Mungo Jerry’s early hits is about to be released in Germany, Mungo Jerry’s Greatest Hits and Ray has appeared on a song by a group called Panache doing the lead vocal on I Wanna Dance, and this has been released as a single in Britain on the Mach1 label, Cat,No; MAGIC004.

By the time that you receive this newsletter, Prospects, the other TV show Ray is involved in will have had its first showing. It is being transmitted by Channel 4 on Wednesday evenings at 9 p.m and lasts for an hour.

There are twelve parts to the first series. Ray has written several songs for the show, including the theme song that is being released on the 17th February as a single. 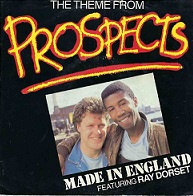 Full details are as follows; Prospects c/w Stay Sharp is recorded by Made In England featuring Ray Dorset on the Red Bus label – Cat No: RBUS 2208, distributed by PRT.

Made In England are a new band who issued Stay Sharp last year and they did a couple of TV shows to promote it. Ray is not involved with this song.

A song of Ray’s used in the series was in fact a demo song made in his bedroom and the producers liked it so much that this is the version used as there was not time to go and record a top quality version.

It is a song from the Mungo live set called Thankyou Very Much. As with Wizbit, an LP will be issued in the near future featuring Ray Dorset’s songs, with full details sent as I receive them.

The year that saw Ray Dorset (aka Mungo Jerry) release In The Summertime ’87. Backed by Nick and Jon Wren, as The Brothers Grimm, it entered the charts in various countries. Keyboard player Nick filled us in on background and success of the single.

“That version was co-produced by me, my brother Jon and  Ray. I did the keyboard arrangements etc.

“It was recorded at Red Bus Studios in London and subsequently released by I.R.S records Illegal label in the U.K and through C.B.S in Europe. Got a Job was recorded in Ray’s Hindhead studio.

“My good but sadly departed friend Ian Harrison financed the recording session hence his name appearing on the back cover of the single and twelve inch.

“My mum died in 1987 just before our first T.V appearance and never got to see us on TV. Ironic that the first TV we did was in the then TVS (Meridian) region. A daytime show with a young Fern Britain as we came from West Sussex, Bognor Regis.

“It got to No.1 in the indie charts. When we played in Denmark, after we came off stage having played this enormous tent, we were all a bit puzzled why prior to our performance the previous artist, who I believe was Flaco Jaminez, had played to a half empty tent and all of  sudden it just filled up and was packed with around 10,000 strong crowd. Some Danish bloke back stage said that the reason was because we were No.1 in Denmark. I remember it so clearly. Never been able to clarify that though.

“We got to No.30 in Holland as I have seen a chart. There were strong rumours that we had charted well in Sweden Finland Norway and France and Germany but we have no evidence to prove the case.

“I have two photos taken backstage in Germany when we did TV shows in Munich and Berlin. I met Roger Daltrey back stage in Berlin and had a good chat with him.  Nice bloke.

“I think we did okay in Italy as well as we flew out to Padua, Northern Italy to do another open-air live broadcast TV show.

“We flew from Southend to Cannes, Cannes to Frankfurt, then Frankfurt to Padua. It was on a Friday as we flew back the same route straight after the appearance and did  It’s Wicked, the kids programme on the Saturday Morning.

“We also did an extremely popular German game show with an estimated audience of 17 million. It was also simultaneously shown in Austria to an audience of 10 million!” 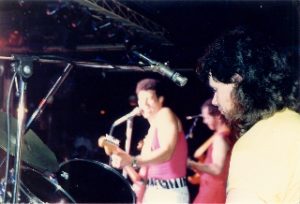 “The Saturday show was remarkable. Ray did three sets, each 50 minutes and a two song encore and then did an extra encore.

“After an hour the landlords wanted to go home and they began to flicker the lights to show Ray that he should end the show but Ray did not notice, or did not want to notice. “Do you wanna go home?” Nooooooooo!

“Do you want one more?” Yeahhhhhhhhhhhhhh!  Ray played one chord and then the landlords cut off the current. That was the end of the show!

“After the Friday gig, Ray did an interview on TV Tele 5 live after midnight. I do not remember the host, maybe I have to think a lot more.

“He often mentioned Mungo hits and said every time, tounge-in-cheek, “my Grandma used to say “… Ray said “your Grandma must have had a fantastic record collection.”

Ray Dorset said…“I took the family over to France for a few days and played the Lutte Ouvriere Festival together with Joe Rush. We did the skiffle and jug band type music that you heard on the last cassette (Jerry Jug and Joe), it was a great gig”! 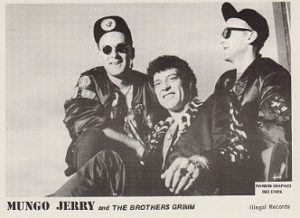 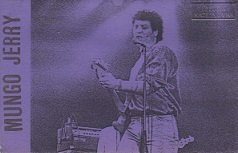 The fan club at the time were able to make available, several ‘fan club only’ cassettes with the kind permission of Ray Dorset and the guys.

One of best or these releases was ‘Jerry Jug & Joe’, incredibly recorded on a Walkman but surprisingly, very good quality for all that, and featuring Ray Dorset and Joe Rush playing together in Paris, 1987. 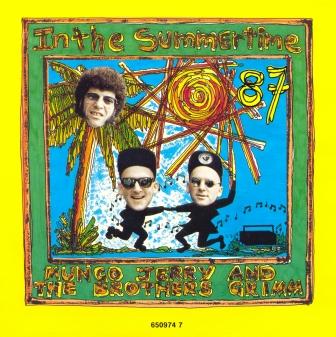 Ray produced a new version of In The Summertime in 1987.

The band at the time was another happy, fun-filled line-up with Nick and John Wren  on keyboards and drums respectively, Les Calvert on bass and Mick Frampton on percussion.

The band undertook another major tour of Ireland and played the song live on Irish Breakfast TV.

A 12″ version was also made available and the b-side, Got a Job was also performed on the It’s Wicked TV show.

Nick Wren told us about the story behind this particular shot…”The photo above of Ray and brother Jon, shows the two of them standing alongside the plane used to fly them out for the open air TV show in Padua Northern Italy as that was what we flew in on those epic two days!

“We flew on the edge of a massive storm on the last leg of the outward journey and the pilot thought it would be fun to fly into it which we did, but not for long as we were pelted with hailstones which was quite scary to say the least!

“Ray looked nervous as it could have been a Buddy Holly moment but we survived! Crazy days!” 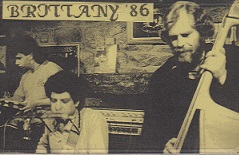 The fan club were able to follow-up Jerry Jug & Joe with Jerry Jug & Joe 2, thanks to Joe himself who provided another simple Walkman recording, possibly even better than the first.