RECENTLY ADDED TO THE SITE

Welcome to our Mungo Jerry news page. Here you will find all the latest on our ‘mighty man’ and his band.

Ray has been particularly taken with this new version of In The Summertime – check it out!

THE LATEST STUFF FROM RAY DORSET aka MUNGO JERRY

Hi Folks, I have finally got to write some more MJ news, I was hoping to post a weekly update but unexpectedly a few things cropped up, and I just did not get round to putting anything together.

I am back in Cologne again, I only got to stay back in England for about two weeks, never mind, lots of stuff going on.

The official release date of the Somelight album is May 26th, and reviews and promotion have been very good.

I am featured on the front page of the latest issue of the Musix magazine in Germany, it also has a two page feature on me and the album. Three hundred thousand copies of the magazine are printed and distributed free from all the branches of the Media Markt multi media store.

Feels Like I’m in Love, the the third UK No1 song that I wrote is featured in one of the five award winning episodes of the Channel 4 TV series “It’s a Sin”. The series is set to be broadcast via Netflix, and also in the USA.

In the UK and Germany, my hit record / composition, Alright, Alright, Alright is now being used by LinkedIn for a six month advertising campaign. The set to become a cult horror movie, X, which features In the Summertime in the opening sequence is scheduled to be shown in cinemas in Germany on May 19th, it has received great reviews in the USA already.

The TV, cinema, and social media advertisement that I appeared in for an ad campaign in Switzerland has now gone live, it should put a smile on your face if you get to see it. It can be found on YouTube.

I have agreed for me and my band to do a festival in Norway on August 5th, the first live show that I have done since February 2020, and I have also agreed to do a guest spot with Christoph Steinbach on his Boogie Boogie show in Kitzbuhel, Austria on August 12th.

That’s enough for now folks, God Bless and look after yourselves

Look out for the next edition of ‘Ray Writes’ COMING SOON!


Here is the interview Toby did for the Keyboard Chronicles, where he chats about his time playing with Rialto, Mungo Jerry and The Stranglers and more besides.

(Thanks to Juergen Keuneke for the tip off)

HAPPY BIRTHDAY TO RAY:  Thanks to our friend, Mick O’Hanlon, he told us that Irish national radio RTE1 sent birthday greetings to Ray on the Ronan Collins show. It went like this: “Here’s a man with a birthday today, Ray Dorset, also known as Mungo Jerry”, before playing Lady Rose.

Ronan then played Crocodile Shoes by Jimmy Nail before returning to the topic of Ray’s birthday.

“Before that we heard Ray Dorset with Lady Rose on his birthday, 76 today. Also known for In the Summertime, Mungo Jerry had many hits during the 70’s. Described as a good time, bluesy, jug band and, that’s Mungo Jerry”.

You can catch up by clicking HERE at just over 18 minutes.

CAN THE GLAM!: JJ has tipped us off about a new 4-CD Glam Rock compilation from Cherry Red Records that features one track by Mungo Jerry, Long Legged Woman Dressed In Black.

Somelight now available to pre-order HERE release date May 27th. The promo for That’s The Colour Of Love single and the album is about to begin in Germany, Austria and Switzerland.

Thanks to Ray and new to site are the lyrics to Mungo Jerry’s album, Somelight.

“I’m finally getting the stuff ready for the digital and physical release of the Somelight album. Happy To Be will be the single for the promotion, with a video clip in the making.”

Recorded remotely, there are twelve tracks in total and having had a preview, I can say that it is top draw with as the title suggests, ‘some lighter tracks along with some rockers’. 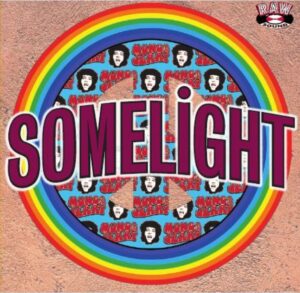 The wonderful Bruce Brand has taken care of the artwork.

We have listed all of the tracks below and you can now hear snippets from all of them by clicking below:

LORD, WHAT HAVE WE DONE

LET’S DO IT AGAIN

THAT’S THE COLOUR OF LOVE

A PLEA FOR THE PLANET

We can now post the brilliant new video for the very sobering Somelight album track, A Plea For The Planet which is part of the Minds Behind The Music project.

Click HERE to buy the Minds Behind The Music.

Click HERE to buy an mp3 of the album.

The video has now been posted on the official MJ YouTube channel. Feel free to pass it on. The albums will be released at a later date, more videos from the album tracks are in the pipeline.

“…This is fantastic (God bless you Ray)…” Marc Viscel.

“Very thought provoking and the music quite haunting…” Stuart Turner.

“Impressive, the lyrics, the vocals, the sound and production and of course the message. Can`t wait to hear the whole Somelight album”…Bengt Hertzman.

You can also check out this relevant piece (found by JJ) about Minds Behind The Music.

“A new CD that once again surprises in the eternal staying power of one Ray Dorset as he takes you back to the late 60’s early 70’s with another highly listenable affair which draws on the blues & jug band sounds with up to date added touches.

“Great to hear those harmonica sounds. Not a weak track & highlights are Whole Lotta Rhythm, A Plea For The Planet & Lord What Have We Done.”

IT WAS 50 YEARS AGO: …  that Mungo Jerry’s fifth maxi-single, Open Up was released. It was the first release after the departure of Paul King and Colin Earl and charted at 21 in the UK singles charts.

RAY DORSET on Open Up… “I was due to go in to hospital to have my tonsils removed but had to cancel this because of the problem in sorting out a new band and Barry, etc thought that we should get a single out as soon as possible to keep the momentum going after the press announcement of the split.

I wrote Open Up in a hotel just north of London, it had a Doors influence and I had the idea to use the instrumental break from one of the Good Earth tracks“.

BARRY MURRAY on Open Up… “I thought the best thing to do would be to get a single out quick. Ray was not 100% there in his head, because of all that was going on around him, he was concerned about the state of the band. I said, look at it this way, you don’t split the money four ways now, just pay everybody a salary. That seemed to cheer him up.

We filled a gap, Mungo was still alive. At this time, I was having my own problems with Eliot and Elias, they had changed and I did what I told Paul and Colin not to do, I got out!

I sold them my shares in the company and started afresh with Harry Simmonds with the Simmonds/Murray Management Agency, looking after Savoy Brown and Chicken Shack amongst others.“.

DAN PETER INTERVIEW: Just added to ‘world’ is an interview Ray did with Dan Peter (largely in German) in Ludwigsburg some time ago, around 2010 it seems. It can also be viewed on Facebook by clicking the link below.

NEW ONLINE STORE: The brand new Mungo Jerry online store is now up and running. It features the merchandise from mungojerry.com and will, in time, feature new box sets and new pressings of previously released albums. Just click on the link below to visit the store.

MERCHANDISE STORE: Powered by Envista Branding, the Mungo Jerry merchandise store is also up and running. Here, you can buy t-shirts, coffee mugs, bags and caps. Again, just click on the link below.

Click HERE to view and have a listen to a new advert for Kewpie doing the rounds in Japan with a song composed and performed by Ray called The Colour Of Love.

Click HERE to read DJ Jon Kutner’s nice piece on In The Summertime.

By clicking HERE, you can also watch this reaction video sourced by John Hornhaver in Denmark.

And HERE to watch an instrumental guitar piece for In The Summertime.

John Van Der Kiste has just informed us that Mungo Jerry’s debut album reached No.64 in the Billboard charts way back in 1970. Click HERE to view the chart.

THE PAUL LESLIE HOUR INTERVIEW: Here is another great interview with Ray on The Paul Leslie Hour in the States.

MARC VISCEL : How about this brilliant piece of artwork from our friend, Marc Viscel over in New Jersey? 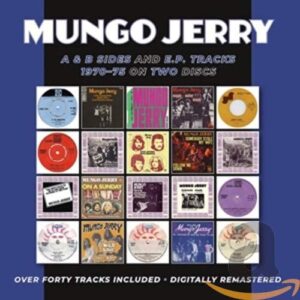 A compilation double CD is available from Beat Goes On Records.

It features all of Mungo Jerry’s A and B-sides from the Dawn singles and also features tracks taken from albums.

By clicking HERE, you can read a review of the CD. 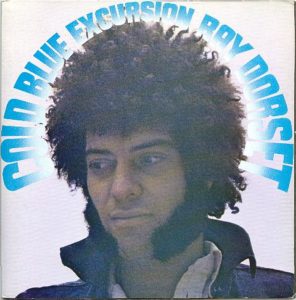 BELGIUM MEDIA: Rob Kamphues let us know of three adverts that were  shown in Belgium.

KARAOKE MUNGO: New to Mungo Jerry Raw Vision and YouTube is this, the only official karaoke version of Ray’s legendary composition.

The video was created by Ray Dorset and Darren Jones. 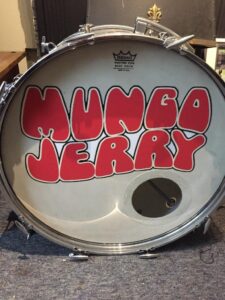 Ray also appeared on radio in the U.S.A taking part in a 30 minute interview in the Boston area.

AUTOGRAPH REQUESTS: Just a quick reminder that unfortunately, the official Mungo Jerry website – mungojerry.com – are unable to provide autographs due to the overwhelming volume of requests.

ROB KAMPHUES – NEW WEBSITE : Our friend Rob Kamphues has a brand new website covering his vast Mungo Jerry collection, believed to be the biggest in the world.

FACEBOOK : There is a Mungo Jerry discussion page up-and-running on Facebook, something else I came across by accident. Click HERE and log-in to have a look.

JJ has now sent us a lot of links for Mungo Jerry related videos, including an interesting cover version of In The Summertime by the duo Fullsweet. JJ has also supplied a link to the 1970 Christmas show at Paris Olympia.

U.S.A IN THE SUMMERTIME COVER

GOODTIMES – IN THE SUMMERTIME

DAVID HARLEYSON – IN THE SUMMERTIME

…and ITS in a horror sex movie… 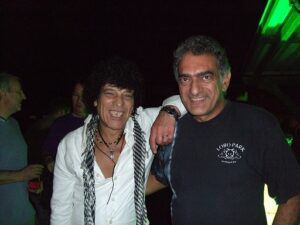 Juergen Keuneke has found a piece of footage of Mungo Jerry from way back in 1970 as part of a 70’s-type show.

Located at around 41.39, you can view by clicking HERE

Somebody Stole My Wife (Cover)

Discovered by John Hornhaver, check out this fun, quirky video of Ray’s song, Somebody Stole My Wife, from the Electronically Tested album.

From the archive of Radio Bremen, Beat Club…

“This must have been 50 years ago as it is the actual 1970 line-up and I have the red waistcoat on that I bought from Colin Earl for ten shillings. It was lost at a gig somewhere”…