The critics pondered over how Mungo Jerry could follow-up the hugely successful, In The Summertime but they needn’t have been concerned as it was followed up by the hard-rocking stomper Baby Jump, another Ray Dorset composition and…another number one hit!

Over the years, Ray Dorset has become known as the songwriter and his alter-ego, Mungo Jerry as the performer.

Tracks: Baby Jump, The Man Behind The Piano/Live From Hollywood.

“After the decision not to run with Have a Whiff On Me, Follow Me Down was also considered, Barry decided on Baby Jump after I had come up with the new lyric. I had no title and suggested that I call the song Baby Jump but I was unsure, Barry said that it was a good idea.

“The groove that we created on stage with this one was tremendous and we also used to play it at the rock‘n roll clubs, Barry had been to one of the gigs at the Northcote Arms and was excited about the dance that was going on down there, he got some guys and girls to come to the studio and be photographed to show how it was done.

“In fact it was at one of these gigs that I came up with the idea for the song. Somebody called out for me to play Brand New Cadillac but I didn’t know it, although I had heard the song, so I just played the riff on the guitar and everybody in the band joined in and I made up and mumbled some words, it developed from there.

“It was also good that it was totally different from anything else that we had recorded so it would surprise the critics who thought that we would most probably follow up In The Summertime with something similar. It was a good move”.

“A raucous, dirty, silly, angry, rollercoaster-ride of a #1 single…

“Where to start? The swampy riff that sounds as if it’s being played through a boulder rather than speakers?

“The demented piano, like Jerry Lee Lewis on strong amphetamines? The lead singer, Ray Dorset’s, growling and screaming? The leery lyrics? If Mungo Jerry’s first chart-topper, In the Summertime, was the soundtrack to a chilled summer afternoon’s garden party, then Baby Jump is the soundtrack to the same party, at 4 a.m the next morning, hours after everyone should have gone home, with bodies are strewn across the lawn while somebody, somewhere, has cracked open yet another bottle of tequila.

‘She wears those micro-mini dresses, Hair hanging down the back, She wears those see-through sweaters, She likes to wear her stockings black’… Dorset’s got his eyes on someone so sexy ‘he don’t care where she been…’ The wooing continues: ‘If I see her tonight, You can bet your life I’ll attack…’ (How very 1970s…) 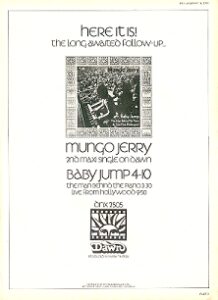 As great as this song sounds, its full of lyrical gems as well. ‘She got beautiful teeth, A toothpaste adman’s dream…’ And then the piece de resistance in the 3rd verse, when he compares his situation, in chasing this girl, to other famous ‘romances’. She is Lady Chatterley, he is the gamekeeper. He is Da Vinci, she the Mona Lisa. And then… ‘I dreamt that I was Humbert, and she was Lolita…’ Yep, he went there. It’s a perfect rock ‘n’ roll lyric: provocatively dumb, yet somehow quite clever …

Meanwhile the simple riff thumps on and on and on, and we get some of the scatting from In The Summertime. On first listen you would never guess this was by the same band, but the hints are there. And then it ends. But it doesn’t, not really. Alright-alright-alright-alright-a! And we’re off again. Right back to the start. ‘She wears those micro-mini dresses…’ And you begin to wonder if this song will ever end, or if it will just keep playing and playing until you go insane…

Phew! Eventually it fades. You’re quite tired by the end of it. It’s not a record to casually throw on after a long day. This one requires stamina. Like I said – I love everything about Baby Jump, even if it is perhaps one of the most forgotten #1 records of all time.

There’s no way this would have gotten anywhere near the top if In the Summertime hadn’t exploded the year before – it’s the ultimate shadow #1. But I’m so glad it made it. It just happened to pop up on my Spotify some years and it’s been on steady rotation ever since. (While you’re getting your breath back, have a listen to Brand New Cadillac by Vince Taylor & The Playboys, and decide if Mungo Jerry were ‘referencing’ or ‘ripping off’.)

Mungo Jerry won’t score any more number one hits. (After this demented mess they never got invited back.) Their next single, Lady Rose, was stymied by the inclusion of Have a Whiff On Me as the ‘B’-side. It was banned, and all copies destroyed on court order, as it was seen to be promoting cocaine use. Ray Dorset still uses the band name, though, and tours to this day.

It’s been quite the hard rocking end to 1970/start of 1971… Jimi Hendrix, Dave Edmunds, and now this. Plus, having this record knock My Sweet Lord off the top is just plain funny. George Harrison was looking to the heavens for inspiration;

Mungo Jerry weren’t looking any further than between their legs… And lo! We’ve had our strongest whiff of glam so far at the top of the charts. It’s coming! In fact, you can think of Baby Jump as the amuse bouche before the King of the genre comes along next…

To view the internet page and visitors comments, click HERE

Check out this weird review followed by some nice comments, click HERE 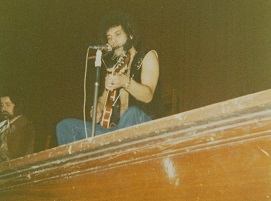 Another maxi-single and fantastic value for money, when one considers some albums are currently being released with only twelve minutes music per side. This has two chart contenders – the rocking Baby Jump and jugband,  The Man Behind The Piano which totals seven minutes forty, and a live cut from last years Hollywood Festival lasting nine minutes fifty. The atmosphere throughout is fun and great quantities of energy are released. It may be skiffle, but by God it makes the old thimble fingers itch.

One might have expected Mungo to retain its jug-cum-skiffle approach following the sensational success of In The Summertime. But this is quite different – it’s harder, heavier and much more biting. In fact,  it’s nothing more or less than good old rock’n roll!

It bulldozes along at a fair old rate, with boogie piano pyrotechnics offsetting Dorset’s dynamic vocal, so that it sounds rather like Jerry Lee Lewis accompanying Little Richard! And above all, there’s the beat – pounding, demanding and thoroughly infectious.

THE MAN BEHIND THE PIANO – COVER#1

THE MAN BEHIND THE PIANO – COVER#2

Not such a distinctive track as ‘Summertime’ but still very good of its kind. Runs over four minutes and on the same side is the 3 1/2 minute Man Behind The Piano. Flip side is a ten minute medley recorded live in Hollywood. All of which adds up to the type of value that disc collectors deserve and I’m sure they’ll go for this in a big way.

Rather slow on the heels of In The Summertime, which, I am informed is STILL selling in ridiculous quantities abroad, comes this release from MJ. Another Dawn maxi-single, it contains the title track, plus The Man Behind The Piano and features on the b-side, Live From Hollywood, a badly produced, but very exciting live recording from the scene of Mungo Jerry’s emergence as something different at last year’s Hollywood Festival.

Baby Jump is a nice uninhibited gravel-vocalled offering written by Ray Dorset and containing some amusing lyrics. I prefer The Man Behind The Piano, which is far more original and the b-side as the sleeve notes put it – “it’s rough and ready beset with technical problems, but the atmosphere was really great”.

This really is good value, even if it might not be such an innovation as In The Summertime was. You can tell why it is called ‘Good time music’.

“Baby, Baby, Baby jump into my dream”, and it’s everything rock ‘n roll should be, hard and uninhibited, don’t think about it – DO IT!

The Hollywood Festival was one of the best festivals of 1970 and it was where Mungo Jerry first happened. Here is an aural record of that moment. The recording was rough and ready beset with technical problems but the atmosphere was great and we think it makes stimulating listening.

There are two brand new DVD’s – 24 Days, the Mungo Jerry documentary filmed during a tour of mainly Germany in 2016 and a live performance from the Bansko Jazz Festival.

Available through  CHERRY RED RECORDS, is a collection of all of the A and B-sides of all of Mungo Jerry’s singles for the highly collectable Dawn record label, including the muti-million seller, In The Summertime, Baby Jump, Lady Rose, and more. 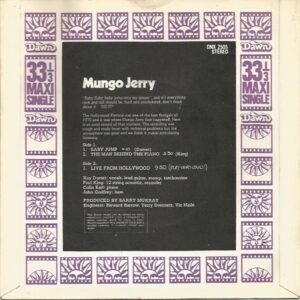