Sadly, once again there were no live gigs performed during 2021, but there were lots of other wonderful things going on in the Mungo Jerry World.

CHATTERBOX UK: Ray had a one hour plus chat with Chatterbox UK and dedicated a two hour program to Mungo Jerry. The first time that they had done this. It went out syndicated to 62 stations around the world, some big and some very small.

Mungo Jerry’s, That’s The Colour Of Love peaked at No.3 on the Heritage chart.

It was also the ‘Record Of The Month’ on Radio Glamorgan.

It was featured from on the legendary Thomas Brockmann Radio Show and was repeated on Frank Laufenberg’s Pop-Stop-das Musikradio.

THAT’S THE COLOUR OF LOVE 1

THAT’S THE COLOUR OF LOVE 2

The radio presenter Mike Read said, “From In The Summertime to That’s The Colour Of Love, Mungo Jerry still have the lightness of touch and the feelgood factor.

Click HERE to read a piece on That’s The Colour Of Love in the German magazine – MUSIX.

MICK O’HANLON’S REVIEW:  There is something in this song that the world needs now!

This YouTube delight contains 3:24 minutes of the carefree, good-time music you expect from Ray Dorset, (aka Mungo Jerry).

Your feet will be tapping along to its easy, infectious beat as the irresistible Mungo groove carries you along its neat melody.

As catchy as other Mungo classics, the song is light, bright, and as uplifting as when the sun comes out from behind the clouds.

The video is full of sunlight and style and it perfectly complements the song.  Treats include a montage of multiple Ray Dorset’s, playing an array of instruments including guitars, piano, bass, banjo, accordion and even the ubiquitous Mungo Jerry jug!

Sunny scenes of nature in all its splendour carry the song along its melodic path to the last beat that leaves you wanting more. This little piece of uncomplicated genius could help us whistle and hum our way happily through lockdown.

Style is a way of saying something about yourself without speaking. This musical pick-me-up is cheerful, sunlit, Mungo Jerry style, at its best.

“Loving the new tune., it has that cool happy vibe everybody wants but can never find…”

“I just wanted to say, that new song is fantastic. I cannot get it out of my head. So happy and positive. Great tune and great lyrics. Well done…”

“…Excellent, hope to hear it and other songs live soon…”

“…Gotta luv this man, always brings a smile to my face…”

STUART COWELL INTERVIEW: Derek found this interview online with Stuart Cowell, from the band Titus Groan, who you may recall played guitar on the Mungo Jerry track, Little Louis on the Lady Rose maxi-single. He does mention Mungo a time or two and recalls the Hollywood Festival. 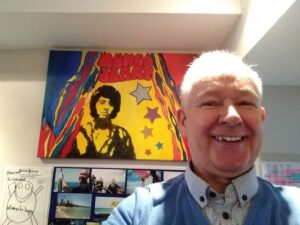 It is a painting by his son Gavin, given to his Dad as a birthday present.

INTERVIEWS: Ray has recorded a very good interview with Shout radio for the Minds Behind the Music Project, it will be broadcast shortly and he is expecting to receive the complete unedited piece to use as he wishes. He also did the same with Plastic EP in Oz together with Sabine in the UK.

Mick O’Hanlon has been in touch to tell us, “Ray was just on Irish national TV (RTE1 – radio telefis eireann) during the last hour (28/12/21). He featured in a little segment on a show called How Ireland rocked the 70’s.

“Basically, the Mungo clip was a look back on an open air festival from 4th September 1970 in Richmond Park, home ground of Dublin team St. Patrick’s Athletic F.C.

“The establishment at that time deeply distrusted youth culture and bands and there was a heavy security presence at the gig. Anyway, some of the crowd rushed the stage and joined the band onstage and the organisers pulled the plug after three songs.

“It’s a nice little segment with lovely drone filming over Richmond Park while In The Summertime plays in the background and Ray is interviewed from his Bournemouth HQ.

“Nice touch too, where they show the original promotional In The Summertime video playing on the wall of the grandstand. Nice vibe.

“I will send you all a link to the RTE player when they put it up. Why was I not there I hear you ask? Because I was only 14 and the schools, where we got all our info on bands, were closed due to a teachers strike that went on for a few weeks. So, I never heard about it until afterwards, even though it was in the newspapers. Anyway, my mother would not have let me go”. 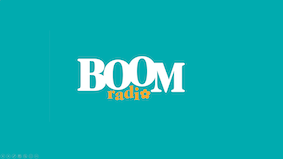 Apparently, Boom Radio is the most listened to digital radio station in the UK.

Thanks to Darren Jones, to listen to what was a great interview, just click below.

BRITAIN’S BIGGEST 70’S HITS: Britain’s Biggest 70s Hits (EP 1: 1970) was broadcast on Friday 22nd October at 10pm on Channel 5 in the UK. Ray participated in the series with comments on some of the music featured.

The following week featured 1971 and once again, Mungo Jerry were mentioned with the bands second consecutive number one, Baby Jump (at 16 in the chart) received some positive comments with DJ Tommy Boyd saying, “Mungo Jerry were an amazing act”! 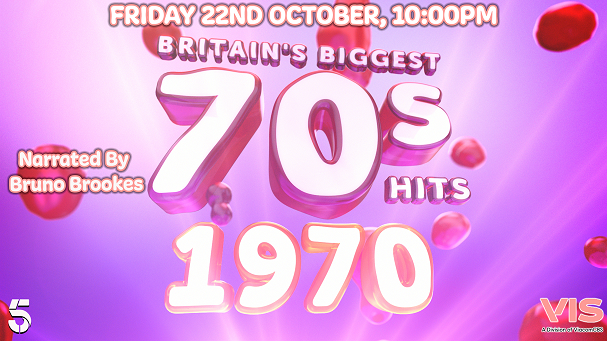 1970 U.S.A TOUR: Click HERE to read an interesting story by Steve Miller regarding the gig he shared with Mungo Jerry at the Fillmore East in 1970.

RAY ON THE ALEX DYKE SHOW: Ray spoke to Alex Dyke at 11 pm UK time (23/07/21) on Radio Solent which was set to go out on 6 BBC radio stations. Alex played In The Summertime and That’s the Colour of Love.

JJ sent us a link to some photos and info regarding the gig on the 6th of April, 2012 with Wishbone Ash.

JJ has also came up with a few bits of news following his holiday in Cyprus.

Like in 2020, on KISS FM, it’s summertime! Every 2 hours, we had a jingle with Shaggy and Mungo Jerry’s original played on air. Summer, in Cyprus, is from May to October so there are many, many airplays!

In a French/Belgian comic, it’s 1970 and the Daddy is singing In The Summertime. Click to link below to view 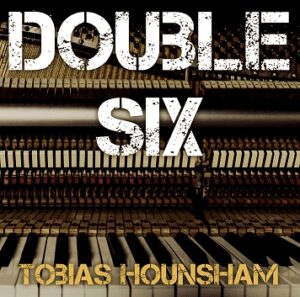 Toby’s plans to perform live on Facebook (27/06/21) were scuppered by a few gremlins.

RAY ON CELEBRITY POP QUIZ: Ray took part (via Zoom) in a celebrity pop quiz for the legendary DJ/Radio Presenter, Mike Read on the Nation Radio website. The show was available to view on June 13th in many countries. How many did he get right? Click the link below to find out.

A new book by Peter Checksfield was published about the legendary TV show Top Of The Pops.

There are several pictures and recollections by Ray Dorset included and to purchase, just click HERE

From the book Blockbuster – The True Story of The Sweet by Dave Thompson.
Andy Scott & Steve Priest were asked to produce the solo Brian Johnson album that he was recording for Red Bus and Ray Dorset was providing the song material for. As we know AC/DC’s management bought out his Red Bus contract and it never saw the light of day. This was late 1979 early 1980….
and a couple interesting links…
IN THE SUMMERTIME COVER
AND ANOTHER

Time Is Now…found by JJ

Also found by JJ is this review from Rolling Stone online…

RC AND THE AMBERS – GRAVY AND BISCUITS

Turnpike Troubadours bassist RC Edwards and collaborator Amber Watson team up for the wildly fun side project RC & the Ambers, a cosmic-country collective that is equal parts Burrito Brothers, the Band and Mungo Jerry. In the hip-shaking “Gravy and Biscuits,” the group extol the virtues of running away from home for love, for music, or just for a good time. “I was whistling Dixieland in a punk rock bar with a bluegrass band,” Edwards sings in a helluva opening line. But there’s eclectic musical muscle behind the playful lyrics too — thanks to a band that includes upright bass, mandolin and a “zydeco rub board.” Their debut LP Big Country arrives in September.

“I went to London in 1971. In early 1972, I joined Chicken Shack. The original singer was Christine McVie, who was Christine Perfect at the time. They were a name band and it was great for me to get into a name band after being in England for several months. I was cleaning flats and working in a restaurant. And then I joined Chicken Shack. They were under the same management as Mungo Jerry. And Ray Dorset was the main guy in Mungo Jerry, the one with the sideburns and the space in his front tooth.

“I loved Mungo Jerry. It was blues music, but more Leadbelly and that kind of blues. They’d already had big hits, and a huge one with “In the Summertime.” They went off the scene for a bit after that, but Ray wanted to re-form Mungo Jerry with new players and be a bit more rock. The Chicken Shack management had a word to me and said, “We’d like to put you in Mungo Jerry with Ray Dorset. He’s reforming the band with new members. Would you be interested?”

“I went down, had a play, and everyone got on great. They said, “Will you do it?” I agreed. It was more a career move more than anything else, I suppose. We did a new record. It flew up the charts and got near the top of the charts. That was “Alright, Alright, Alright.” That was a good, hard-hitting pop song. We did Top of the Pops and loads of shows around Europe and Scandinavia.”

“It was a big step forward, but they were being presented more as a pop band. And then some of the following records were a little bit too poppy for me. … I just wanted to play blues again.”

Check out the lyrics (Thanks to Mick O’Hanlon)
“Here’s a radio playing In the Summertime.
I want to sing along.
But I only know the first line”
To watch on YouTube click

JJ has passed on these cuttings taken from a new French book focused on ‘summer hits’ called, ‘101 tubes de l’été’. 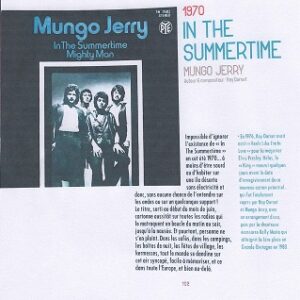 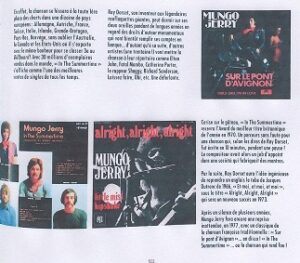 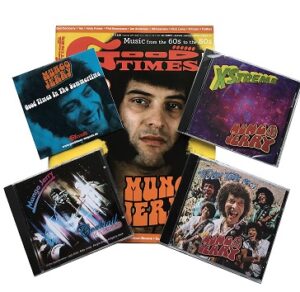 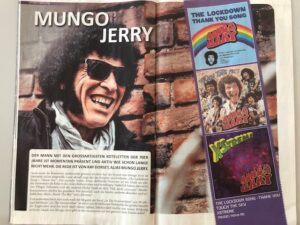