My Girl And Me, was issued as a double a-side maxi-single in the UK along with 46 & On with both tracks shortened versions of those featured on Mungo Jerry’s fourth studio album, Boot Power, released late in 1972. 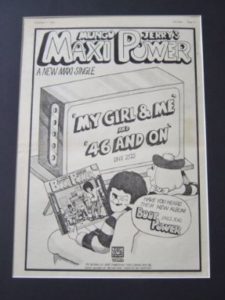 Backed by ‘Summertime’ themed Summers Gone and the rock’ n roller, It’s a Goodie Boogie Woogie, it was the first maxi-single by Mungo that failed to chart.

It received virtually no airplay in the UK and if my memory serves me correctly, I don’t recall a single play which is a shame as both are brilliant songs.

I do remember thinking that My Girl & Me should been the out-and-out lead track despite being a bit on the long side.
<center

But both of the lead tracks however, remain extremely popular with fans the world over.

Tracks: My Girl and Me, Summer’s Gone/46& On, A Goodie Boogie Woogie.

Ray Dorset said… “It would have been good to get into the charts but I did virtually no promotion on the record as Colin Earl and Paul King were taking shares from the album and the first two singles released after the split.

Mungo Jerry have slipped somewhat from public esteem during 1972 and they could well stand a hit record.

It’s difficult to say whether or not this maxi-single will do it for them – I hope it does.

The first song, My Girl and Me is not the sort of riot torn jug band thing one tends to expect from Mungo Jerry. For a start, the whole affair is heavily ‘phased’.

In the summer of 1967, it was almost obligatory to have your records phased but the practice seems to have gone out of favour since then.

Done well, it can be an effective device, and as far as one can tell from repeated hearings on the ‘Disc’ record-player, here it is done well.

The feel of the song is more in line with Brinsley Schwartz than with Mungo Jerry. It has that open, relaxed feeling that the Brinsley’s catch so well.

There are little Bolan-esque  quaverings at the end of some of the vocal lines. But the band have always done that anyway.

Could make it, I suppose?

The other song (Summer’s Gone) on the a-side is a sort of belated sequel to In The Summertime, which it strongly resembles, and grows a bit lethargic in its latter half.

The rock ‘n roller, It’s a Goodie Boogie Woogie was part of the 4-track maxi-single.

There are two brand new DVD’s – 24 Days. A documentary filmed during a tour of mainly Germany in 2016 and a live performance from the Bansko Jazz Festival.