One of the highlights from 2015-19 was a successful tour of Germany, Switzerland, Austria and Belgium in 2016 that resulted in the Mungo Jerry documentary film, 24 Days, and a live double CD of the last gig of the tour, 100% Live.

Both are available from the official on-line shop by clicking HERE.

“Incredible gig, best for me for years and years, can’t understand the tickets sales for Durham as the place was packed and the audience was well into it and singing along throughout.

“The band are shit hot and look like they are really enjoying themselves, sound is so full allowing Ray the time and space to be the showman and it seems he is taking his guitar playing seriously with plenty of tuneful riffs.

“Ray mentioned my name from the stage and a few fans came and said hello as they were old fan club members.

“Mike Berry was deaf going home and the three guys who wear the Mungo wigs from the Processed Pea were there and ending up on stage air guitaring during the encore.

“I spoke to Frankie (cello) and Adam (sax) after the gig and they were knocked out with the reception, and could not believe how friendly northern people were.”…Derek Wadeson.

“Thank you to Ray Dorset & band for a blistering gig last night.” 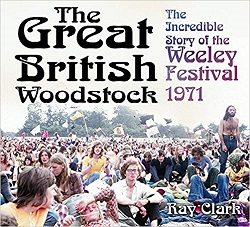 MUNGO JERRY ON THE ONE SHOW : Ray’s contribution to the B.B.C programme, The One Show and their feature on the 1971 Weeley Festival, was shown in June, 2019.

The piece was inspired by Ray Clark’s excellent book about the festival. To buy click HERE

By chance, I came across the original promo film for You Don’t Have To Be In The Army To Fight In The War, shot at the Weeley Festival in 1971 and you can view the video on our page for Mungo Jerry’s fourth maxi-single. 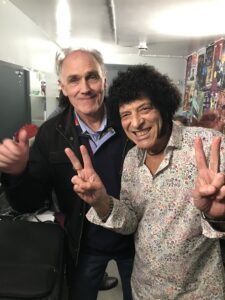 It was Terry that was responsible for the recording of In the Summertime when Howard Barrow asked him to take care of a session.

Terry was also engineer on those early recordings for Dawn.

As ever, the band went down very well…

“Thank you to Ray Dorset and band for a blistering gig last night!”…Half Moon, Putney.

“Awesome gig last night at the iconic Half Moon, Putney, London. I’ve waited 50 years to do the gig there and it was worth the wait. Thanks to all that came and made a great night and thanks to my very special wonderful band members”…Ray Dorset.

MUNGO JERRY IN OSLO : Ray pictured during his recent trip to Oslo. The band with him are Oslo Plektrum who had a hit with their version of Lady Rose with Norwegian words and a title change. The guitarist played with The Stranglers. 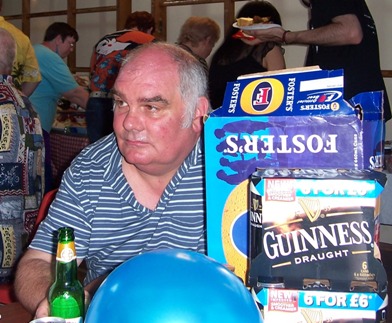 It was sad to report that longtime fan club member and ardent Mungo fan, Jim Smith from Derby had sadly passed away.

Jim was a familiar sight at many a Mungo Jerry gig and was known to lots of fans, particularly those who attended the 30th Anniversary gigs in Newcastle Under-Lyme in 2000.

Jim in fact videoed the gig, and both Derek and myself have fond memories of Jim from our stints as fan club secretaries.

Ray was interviewed on the Chris Evans Show on Radio 2, chatting about the days of recording in his garden shed, and a little bit about the new album, Rewind. 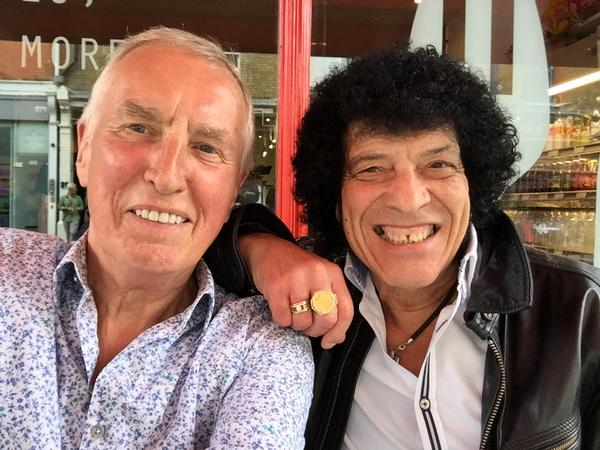 Ray Dorset also attended Radio 2 to record an interview with legendary DJ, Johnnie Walker. Ray chatted about his career, In the Summertime, and we even got to hear Cold Blue Excursion from Ray’s brilliant solo album of the same name.

Bruce Brand has posted a link to a great interview by Writer and Film Maker, Henry Scott-Irvine with Ray for Resonance FM.

Henry and Ray chat about such Mungo things as the Hollywood Festival, In The Summertime and the Katmandu album, and I was pleased to hear Ting-a-Ling from the the Mungo Jerry Trio CD getting a play. 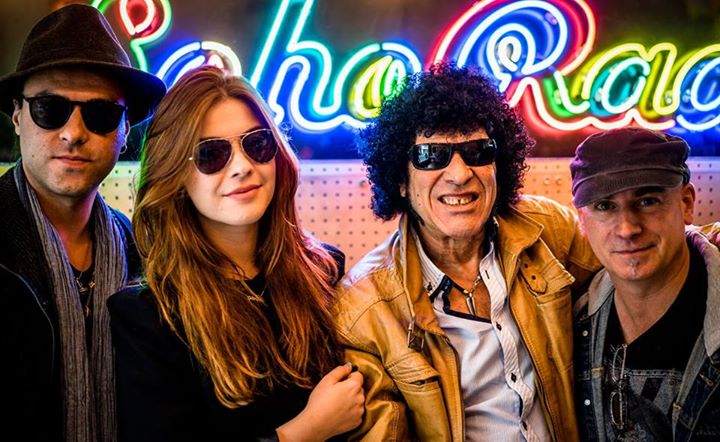 On it, Ray chatted about his career, and also played live in the studio with acoustic guitar, harp and kazoo.

If you missed the show, you can catch up by clicking on the link below.

There was also a TWO HOUR interview with Ray Dorset by radio station, Cambridge 105.

The presenter Greg Butler plays lots of Ray’s favourite music and chats to the great man about his musical career.

Click on the link to view an interview Derek found of Ray speaking to the ‘Classic Bands’ Website’.

Click on the link to view a recent interview Ray did for the ‘Rock Bands Of L.A’ website. 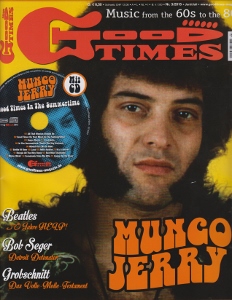 Good Times magazine in Germany had Ray on their front cover for their latest edition with a substantial article and interview with Ray.

They also issued a free Mungo Jerry CD, with the new version of In The Summertime (‘Good Times On Your Mind’) included, in the magazine with 40,000 copies pressed.

The bad news was that it was all in German but it does feature quite a few excellent photographs.

The track listing for the CD was: 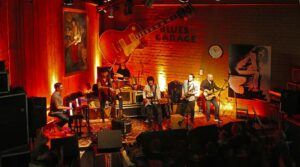 “I think that the longest I have played was at the Evil Rowdies bikers club in Switzerland.

“They invited us for lunch prior to the evening gig and we played for a total of almost six hours!

“Simon Baker, the drummer, was begging for no more encores to be played, he was totally wiped out”.

RECALLING GIGS AT FESTIVALS, PUBS, CLUBS AND EVEN BUSKING FOR FREE…AND PLAYING FOR BIKERS, GRANDMOTHERS, KIDS, ANYONE…

“I found that I could ‘get in the groove’ and play at just about anywhere and give it the same commitment, though I am very nervous about playing under scrutiny, especially by other musicians as I lack confidence in my technical ability as a guitar player and I don’t consider myself to be a singer as in conventional terms, but then again, nor are some of the artists that I admire, to name a few from Buddy Holly, through to Neil Young, Lou Reed and Bob Dylan.

“I can ramble on and get a bit too deep sometimes but I have got a good idea about how to gauge an audience and give them a good time regardless of the category that they have been put in.

“Personally I don’t believe in putting up any barriers or discrimination being it racial, political, religious, class or the like and so it should be the same as far as music is concerned.

“The music press was always writing about the rights and wrongs of the world and how there should be no racial discrimination and yet they used to discriminate as far as musical preference was concerned, like when Punk became popular or cool and nothing else was”.

“There was a time when things were going a bit haywire and I was not enjoying it at all, and also a few years back when I wore myself out and had to hold back for a few months but I am certainly enjoying myself at the moment and feel that I am getting a new lease of life in my old age, although I don’t expect to do any more long tours again”.

“My fondest memories are those from the gigs prior to Mungo hitting the headlines and of course the Hollywood and Rotterdam festivals.

“There are the Ivor Novello awards, the gold discs, etc, and the Sony award for writing In The Summertime and it being the most successful ever summer song.

“There are many great memories of my career both as an amateur and professional over the years.

“I began playing regularly in public when I was fourteen.

“Even though I wrote it in the early seventies, my song, 46 & On, sums up most of it 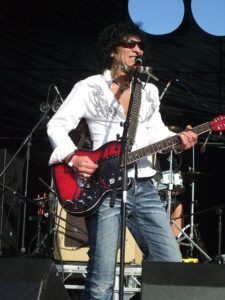 Ray was a guest on the Elvis Hour on Radio Caroline (20/8/19) with presenter Todd Slaughter chatting about Elvis and Ray’s own memories.

You can listen to the show by clicking below… 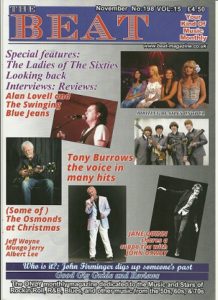 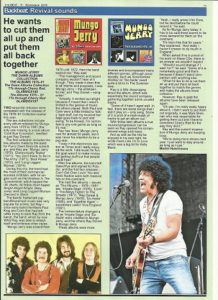 If anyone had turned up on Friday evening at the Brudenell Social Club, a thriving ex-working men’s club in the heart of Leeds student land, expecting to hear Mungo Jerry churn out a few hits from the seventies and some other stuff, they would have been very disappointed.

What they did get were a selection of tracks from Mungo’s latest album, which is due for imminent release, along with excellent re-workings of some of Mungo’s classics.

The evening was kicked of by the punk inspired Loz Campbell trio. It was a very energetic start to a Friday evening, although Loz was suffering from a bad throat which restricted her set. (Personally, I thought this seemed to add a distinctive, gravelly Yorkshire tone to the vocals.)

Loz had been kind enough to lend Ray Dorset her amp as his had inconsiderately blown during rehearsals.

Mungo Jerry then came on stage, and it was obvious that Ray Dorset was feeling on good form, exchanging light hearted banter with the audience (“I’ve got more hair than most of you lot”) and even allowing on stage three ‘Mungowanabees’ who had dressed for the evening, wigs ‘n all.

The first number, Stray Dog was fresh from the new album and was a good bluesy rocking tune, a great way to start the set.

The band consisted of Toby Hounsham on keyboards, Franky Klassen on cello, Darren Jones on bass, Bob White on drums and Adam Davy added a saxophone to the line-up.

The next track up Got To Have a Plan, was a slightly funkier number, with some lovely electric piano. Come To The Party had a New Orleans/Fats Domino feel to it and by this time, the audience were definitely ready to join in with the chorus line of All Night Long and were having a great Friday evening.

Ray was giving his all on vocals, kazoo, harmonica and guitar, (surely not all at the same time? Although it did somehow feel like it).

Then followed some more tracks from the new album, mixed in with some of Mungo’s earlier stuff, interspersed with teasing fragments of the unmissable In The Summertime, which Ray playfully interjected.

Ray rolled back the years with his Elvis style version of the song, Feels Like I’m In Love, which he wrote and was a was a massive hit for Kelly Marie back in 1980.

Little Miss Hipshake had a T.Rex funky groove to it and rocked the room. After a terrific set and a resounding encore, which included Alright Alright Alright, Ray and the band had entertained the audience for the best part of two hours.

True professional that he is, Ray courteously came out to talk to all those who had bought merchandise or just to get a selfie with legend that is Mungo Jerry. 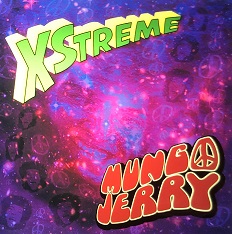 There was also a 3-CD compilation set, Gold featuring recordings for the Dawn label, accompanied by a gold vinyl LP. 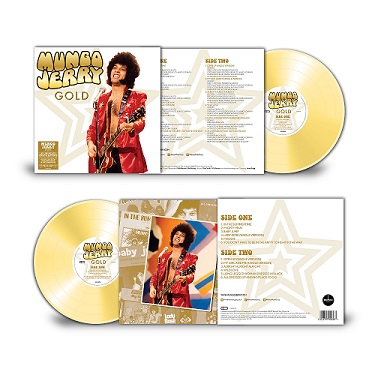