Following on from the sensational best selling single, IN THE SUMMERTIME. The debut album from Mungo Jerry was issued in July 1970.

It peaked in the album charts at 13 and was well received by fans the world over. In some territories it was called IN THE SUMMERTIME and unlike the UK issue, included the legendary track.

Over the years, Ray Dorset has become known as the songwriter and his alter-ego, Mungo Jerry the performer.

Thanks to John Van Der Kiste, we’ve learned that the album reached 64 on the Billboard charts in 1970.

On the U.S LP version, In The Summertime replaced Daddie’s Brew.

Despite their disappointing London debut at the Lyceum, Mungo Jerry might just be succeeding in bringing good time music back to prominence. A spell of fine weather and the HOLLYWOOD MUSIC FESTIVAL all helped but they’d have made it anyway, judging by the evidence of their first album. Most of it is better than their hit single, and there’s a surprising amount of variety.

They veer from rock’n roll parody (the classic ‘Baby Let’s Play House’) to jug band blues (Jesse Fuller’s, ‘San Francisco Bay Blues’) and the question of integrity and validity never comes into it, because they’re so obviously enjoying themselves and that makes it much easier for the audience to enjoy it too.

With the exception of ‘Daddies Brew’, the songs are singer-guitarist Ray Dorset, who’s rollicking and frequently amusingly bawdy, and Paul King whose things are rather more thoughtful. Colin Earl wrote ‘Brew’ and plays knockout piano on ‘Sad Eyed Joe’. Possibly the most extraordinary track is ‘See Me’, which contains some horrifying screaming, not recommended for those with faint hearts. King’s attractive ‘Movin’ On’ contains some nice hoedown violin from guest Johnny Van Derrick and there’s good rolling instrumental called, ‘Mother*!*!*!Boogie’.

This isn’t an album which requires analysis but I’m sure it will bear repeated listenings”.

MUNGO JERRY (Dawn DNLS3008) is a usual size album full of entertainment. With such instruments as the kazoo, six and twelve string acoustic and steel guitars plus banjo, violin, piano and harpsichord in evidence on various tracks, it’s a winner.

Titles are ‘Baby Let’s Play House’, ‘Johnny B. Badde’, ‘San Francisco Bay Blues’, ‘Sad Eyed Joe’, ‘Maggie’, ‘Peace In The Country’, ‘See Me’, ‘Movin’ On’, ‘My Friend’, ‘MotherFuckerBoogie’, ‘Tramp’ and ‘Daddies Brew’.Oh, and don’t forget to take a look at the 3D picture inside the sleeve. It stands out like the jolly, happy music of MUNGO JERRY.

Backing up their fantastic hit single comes their first album, ‘Mungo Jerry’ on Dawn (DNLS3008) complete with 3D specs with which to view the open-out inside cover photo.

Such a gimmick is really not necessary. The contents are a continuation of the kind of music on the maxi-single, warm, groovy stuff that’s sure to please almost everyone. All new numbers on the LP, Mungo Jerry are definitely here to stay”!

Part of an interview with Steve Elliott at Something Else. Ray Dorset aka Mungo Jerry & the albums stand-up bass player Michael (Mike) Cole speak.

STEVE ELLIOTT: Your first album In The Summertime was a good-time album that’s really timeless. What do you remember about recording it?

RAY DORSET: Thanks for the compliment. The tracks were recorded pretty quickly, 17 titles in about 37 hours. It was easy work. The only thing was, we thought that we did not really capture the true Mungo sound and vibe that we got playing gigs. In retrospect, enjoying music at a gig is a different gig than listening at home or in the car.

MIKE COLE: Well, thanks for that. It was recorded mostly in two sessions, as I recall, before and after Chrismas 1969 at the Pye studios in London. Virtually all the tracks were recorded live, with some overdubbing of vocals and percussion effects, etc. Ray and I recently met the recording engineer, Howard Barrow, and we had a good chat. It was Howard’s motor bike that you hear revving up on “In the Summertime.”

STEVE ELLIOTT: How about your thoughts on these songs: “Johnny B. Badde,” “Maggie,” “See Me,” “Mighty Man,” “Movin’ Man,” “Daddy’s Brew,” “Sad Eyed Joe,” and the warm-weather anthem “In the Summertime”?

RAY DORSET: “Johnny B. Badde” is a song that I played to Colin when we were together at the house of his parents. They had an upright piano and we would sometimes go there and try out a few songs. I only mention the name Johnny in the song, the “B. Badde” was just a joke — no need to explain that and the rest of the text. “Maggie” went down a storm at our first gig, at Oxford University. We must have played it about seven times. “See Me,” always wild and over the top. I was influenced by Captain Beefheart on this one. “Mighty Man,” I came up with that one onstage doing a gig in Swindon, England for the RAF nurses. As for, “In the Summertime,” I’m grateful to have written and recorded what has become a worldwide standard.

MIKE COLE: Apart from “In the Summertime,” obviously, I like “Johnny B. Badde” and “Mighty Man” a lot — as they have a good feel and swing nicely.

STEVE ELLIOTT: There were also some very tasty covers on the first and second albums, like “San Francisco Blues,” “Have a Whiff on Me” and “Dust Pneumonia Blues.” What do you all look for when covering a song?

RAY DORSET: I just have to like it. I also like to do it the way I hear it in my head when I’m out and about. I never try to make an exact copy of the original.

MIKE COLE: Speaking for myself: Firstly, do I like the song? Then, Can we do justice to it and bring something original to it? Jazz players base many of their improvisations on the compositions of the great American songwriters — Irving Berlin, Jerome Kern, George Gershwin, Rodgers and Hart and many, many others. What you are looking for is an expressive melody, interesting chord changes and good lyrics.

STEVE ELLIOTT: As Mungo Jerry, you guys were able to combine blues, jug-band music, ragtime, and rockabilly into a pretty seamless blend, while still coming up with your own sound. When I hear your music, it immediately puts me in a good mood.

RAY DORSET: That’s great. I guess that the first music that I really got into was rock n’ roll, skiffle and rockabilly. These types of music are closely connected. It all has roots in the blues, plus my father used to tune into the radio trying to find the kind of music that he and my mother liked, and we all used to get excited when we heard good old-time jazz, also rooted in the blues.

MIKE COLE: Well, I’m glad the music puts you in a good mood because that’s exactly our intention
.

STEVE ELLIOTT: You were one of the few all acoustic groups performing back in 1969 and ’70. What was that like for you?

RAY DORSET: Actually we were not acoustic, I played a 1960 Fender Strat — which was unfortunately stolen from the studio. OK, we also used banjo, 12-string guitar, piano and stand-up bass, kazoos and blues harps. The vibe then was love and peace and our line up and image reflected the mood of the times, late hippie scene. The benefit was that we were completely different from all of the other outfits around at the time. No drums; I used to stamp on the floor. We all sat down too; no jumping around. 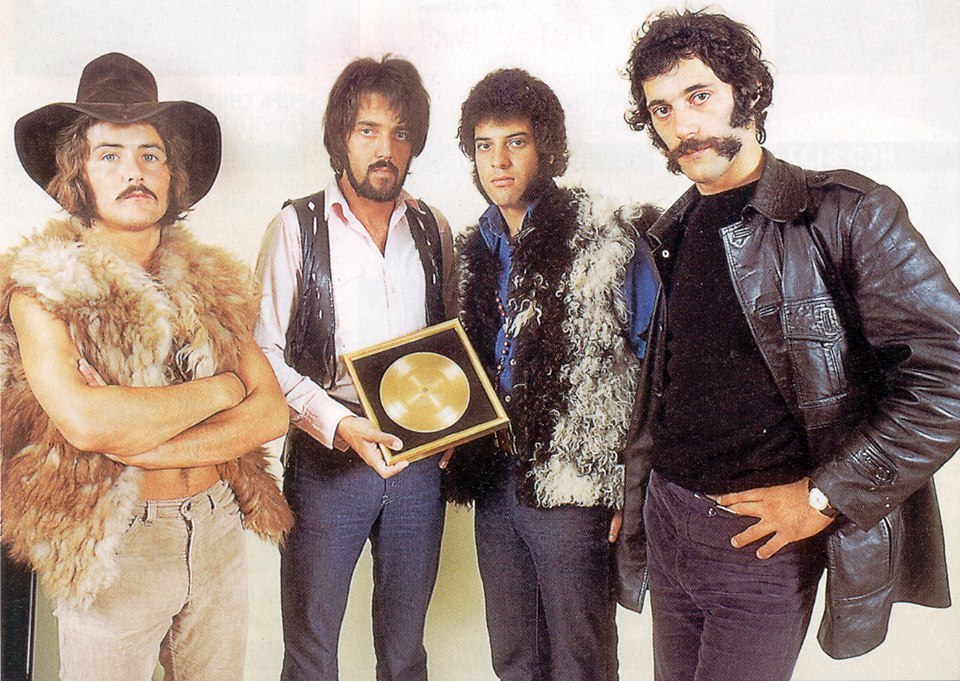 MIKE COLE: One of my own favourites from that era was the Incredible String Band. I’ve always been attracted to acoustic instruments, and hence to acoustic bands. I’ve played jazz for most of my life, and I love this music because at its best it expresses human feelings so well using, for the most part, acoustic instruments — including the human voice. I have no doubt that it worked to our advantage. We sounded different and looked different from most bands at the time. For me, many of the most enjoyable gigs were those prior to the hit single. I had played literally hundreds of gigs in jazz, cabaret and general-purpose bands, but never in one which generated so much excitement with an audience. So, it felt great to experience that and be part of it.

REVIEWS FROM THE INTERNET… 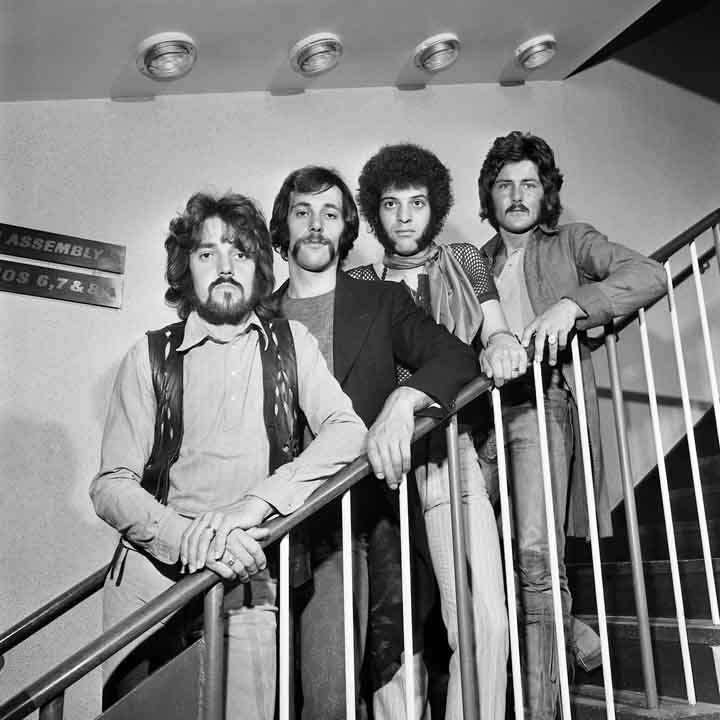 “In the summertime when the weather is high you can chase right up and touch the sky, when the weather’s fine you got women, you got women on your mind. Have a drink, have a drive go out and see what you can find” – after it was released “In the Summertime” was in the air all over the world and this catchy upbeat song sounded quite different from the rest popular stuff of the time. To listen to the album was mostly fun then, and it is mostly fun now – ‘though this set doesn’t offer much variety the music is pretty original”.

“The title-track is still one of the most beguiling (if casually sexist) hits of its era, but the other 14 songs are even more interesting: Jesse Fuller-influenced jug band (“San Francisco Bay Blues,” “See Me”) and Tampa Red-style kazoo blues (“Maggie”), as well as the influence of Piano Red (“Mighty Man”) and credible instrumental blues-rock (“Mother Fucker Boogie”). The hit “Johnny B. Badde” is here, and the band also covers rock & roll standards like “Baby Let’s Play House,” done in a surprisingly authentic manner for 1970. One of the CD reissue’s two bonus tracks, “Tramp,” busts up the mood a bit, with its fiddle accompaniment and a decidedly mournful tone, but the other, the hard-driving Howlin’ Wolf-style “Mungo’s Blues,” which offers a tastefully lean Hubert Sumlin-influenced guitar solo, fits in perfectly with the existing album. The transfers are clean and bright, and the annotation is extensive”.

“Mungo Jerry’s debut album, released hot on the heels of the mega-selling “In the Summertime,” was more or less a straightforward recapitulation of what was already regarded as among the hottest live shows around. Although a handful of concert favorites (“Mighty Man,” for one) were lacking, the kazoo-powered “Maggie,” the pounding country-bop “Johnny B. Badde,” and a barnstorming reworking of “Baby Let’s Play House” were all present and dynamically correct, together with the unequivocally titled “Mother*!*!*! Boogie,” a knock-’em-dead instrumental duet for piano and mouth organ that says as much about Mungo Jerry’s sense of fun as any of the band’s better-known numbers.

Although Mungo Jerry is clearly the work of a band still finding its feet, all the hallmarks of the group’s future career are already visible, both good and bad. In the latter category, the song writing conflict that would eventually see Paul King depart the band is painfully evident, as the haunting “Movin’ On” and “Tramp” deliver melodies and arrangements far from the stamping, hooting, honking glee that was Ray Dorset’s forte. Similarly, the somewhat samey style that would eventually scupper the band he left behind is mapped out by “See Me,” a song that retrospect paints as a virtual medley of every great hit Mungo Jerry ever scored. At this stage, however, such fears and failings were far off in the future, and Mungo Jerry emerges triumphant, a mixed bag of jug-folk-blues that does indeed boogie like a mother*!*!*!”.

(The titles in brackets denote the bonus tracks.)