What a great weekend! First port of call was Radio Newcastle for an interview with presenter Julia Hankin .

Before long he had Julia and friends singing along to San Francisco Bay Blues, Lady Rose and Feels Like I’m In Love.

The record fair on Saturday morning was incredible!

A merchandise stall was hastily put together with records, CD’s, books, t-shirts and fanzines all doing good business.

I’ve gotta say that Ray amazed me on this trip, not just musically but in the way he stood and chatted to fans who seemed to come from just about everywhere, one even travelled from Cornwall!

He made himself available basically all day and seemed to enjoy himself as much as anyone.

Ray had flown up on the Friday morning and the band arrived during the record fair and of course once there, they just had to set up and play.

They played an ‘unplugged’ set playing many of the old songs – Have a Whiff On Me, That Old Dust Storm, Lady Rose, Take This Hammer and a great version of Ain’t You Glad.

The whole gig had a great feel to it, I only wish that we had taped it.

There was one wonderful moment when a young boy of about eight or nine came and stood in front of Ray who was seated in front of the others.

The young lad was loving every minute, clapping and dancing along with the music, much to the amusement of all of us there – brilliant!

The evening gig was performed at The Archer pub with Ray having the packed house in the palm of his hand – Somebody Stole My Wife, Don’t You Rock Me Daddy-o, Party Time, Alright Alright Alright – all had the place jumping and before long the whole place was going absolutely crazy, threatening to get out of hand at times!

The rock biographer and friend of Mungo, Alan Clayson was part of the weekends entertainment and seemed astonished at the audience reaction, and even more so when the band told him that in Sweden, it was even wilder!

THE GREATEST 70’S ROCK SHOW EVER

(with SHOWADDYWADY and ALVIN STARDUST)

FROM FANZINE #12
SUNDERLAND EMPIRE: An old-time theatre, almost packed out to greet a condensed version of Mungo Jerry taking the stage to Let’s Get Ready To Rumble. Ray backed only by Mick Frampton, playing a variety of percussion instruments, acoustic guitar and bass kicked off with a couple of jug band numbers, Jesse James and Jean Harlow. A note sent on from the wings asking the audience not to dance around was promptly torn up by Ray as the dynamic duo kept the good-times coming with a sing-a-long version of Feels Like I’m In Love followed by a song from the very first Mungo Jerry album, Baby Let’s Play House. Great to hear this one again, with some authentic rock’n roll guitar from Ray. 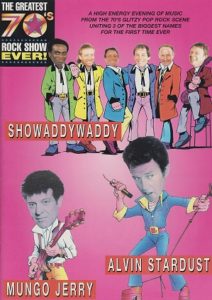 CARLISLE SANDS CENTRE: Unfortunately, we can’t tell you much about this one as we missed the start thinking that is was an 8 o’clock kick-off when in fact it was 7.30 p.m. We took our seats during Lady Rose which was strangely missing from Monday’s set and sat through the remainder of the show which was played out as per Sunderland. Though disappointed to miss the first part of the gig, we were cheered up by an impromptu jug band set in the dressing room featuring Ray on acoustic guitar, kazoo and harp and soundman Phil Swan, who was trying out a tea chest bass and had in fact played on the first part of the stage show. Songs such as We Shall Be Free, You Got Me Dizzy, The Sun Is Shining and Ain’t You Glad made for a great experience for both of us.
MIDDLESBROUGH TOWN HALL: We felt that the Middlesbrough gig was the best of the three we saw with Phil Swan joining Ray and Mick on stage – Ten Little Women, Jesse James, Jean Harlow and Bring a Little Water Sylvie had the place jumping. With In The Summertime and Feels Like I’m In Love winding down our very enjoyable three days, we wound our way home already planning our next trip.
TALK RADIO: Following the gig at Tunbridge Wells, Ray and Mick went into the Talk Radio studio to chat with host James Whale. The whole thing went brilliantly with Ray impressing James with his laid back genius. There was great interest from the listeners who rang up to ask questions and were no doubt surprised to have Ray playing live in the studio. They busked their way through songs such as We Shall Be Free, Lady Rose, Baby Jump, Snakebite and Marguerita. James, who said that he “avoided interviewing musicians at all costs” was quite clearly taken with Ray and the Mungo approach…even the fan club got a plug!

No rehearsal, just went straight on and did it – the result, a truly memorable gig!

Titles in RED with The Dog House Skiffle Group. 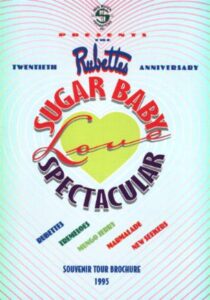 Mungo Jerry took part in a major tour of the UK at the start of 1995 to celebrate the 20th Anniversary of The Rubettes.

Also on the tour were, The Tremeloes, Marmalade and on two dates, The New Seekers.

Despite, not quite being Mungo Jerry’s thing, it was a very entertaining evening for those who attended any of the gigs. 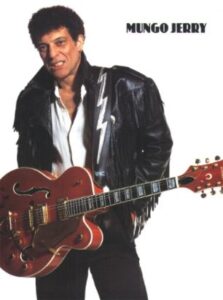 In 1995, the popular music magazine Record Collector finally relented and ran a major piece on Mungo Jerry after several requests from several people.

Their reluctance was based on the ‘fact’ that Mungo were ‘one-hit wonders’ and they couldn’t justify devoting any time to the project.

It was only after they were serviced with 10 little known facts about Mungo, that convinced them that it was worth looking at and in October ’95, the article appeared in the magazine.

In fact, what was intended to be a fairly small piece turned to be a pretty major one with full discography.

“Ray Dorset is a bit like a snake charmer, sharman, a voodoo puppet master, he makes the crowd do exactly what he wants.

“At the end of it all, he bows, he smiles and he says goodnight…don’t expect to stay in your seat at a Mungo gig”! 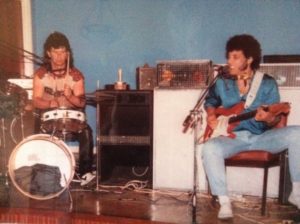 “Hello to you all out there.

“Many thanks fro taking an interest in all that has been happening on the Mungo front for the past few years.

“Just a short note to everybody that has been wondering what has happened to the new recordings.

“Well, the Candy Dreams album has been in the pipeline for quite sometime now and I began recording it proper in 1994, but because of all the extra work and T.V’s etc, I did not get a chance to complete it last year as I was also asked to make a blues album, as a catalogue item, of all original songs.

“The blues album was required at rather short notice so this took preference over the Candy Dreams album.

“The title of the blues album is Old Shoes, New Jeans and I think that it has turned out great. It was to be released as a guitar shaped CD but the company that was to have released it has come up with a technical problem with the shape, and in the meantime, I have received other offers for the albums release which will be finalised in the New Year.

“The Candy Dreams album is being worked on, and Byron and his brother Platon, and Anthony Fisher are helping out with the production. This album is now being worked on in earnest and I hope that you will all like it.

Ray Dorset on the Pea gigs…

“I had mentioned in the Folk Roots magazine that I would like to play some folk clubs and I got offers from Martin Peirson at the Processed Pea and also from another guy who ran a folk club in Newport, Wales.

“I did both, and they were a tremendous success, I was playing more or less the same material that I had played with Joe in Brittany.

“Because of the small instrumentation I found that I could easily adapt to the requests of the audience, and with my heavily amplified foot stomp and rhythm guitar I was able to set up a great groove with help from the punters handclapping and foot tapping. I must say how much I enjoyed doing these gigs, no bullshit!

“I was always hoping to do some recording with the Doghouse guys but I have never been able to get it organised, they are great guys and do a tremendous show”. 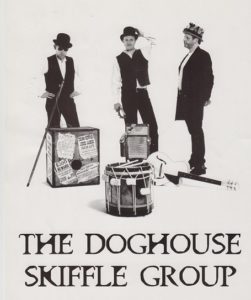 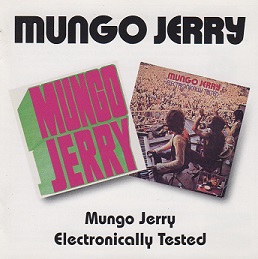 In 1995, Beat Goes On put Ray Dorset’s 1972 solo album, Cold Blue Excursion out on CD for the one and so far only time along with the first four Mungo Jerry albums. Derek wrote in the fanzine (#9) 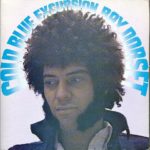 “Cold Blue Excursion saw the light of day and reminded everyone what a work of art it was. Ray was writing hits right, left and centre at the time, and the songs on this album whilst not his most commercial knocked spots of anything else he had put his pen to. 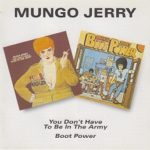 “The You Don’t Have To Be In The Army album was re-issued as a double CD pack along with Boot Power and the debut album, Mungo Jerry with Electronically Tested.

“The pleasing thing about the re-issues is the strong packaging and sleeve notes, full marks to Beat Goes On and Alan Clayson”. 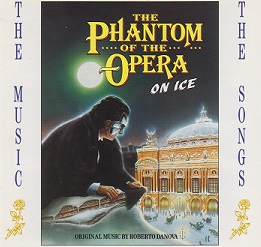 Ray had worked on the spectacular, Phantom Of The Opera on Ice and sang one of the songs, Mr Midnight.

Ray Dorset on the No Frills CD…

“I recorded it live in my house with a stereo microphone on a portable mini disc machine and I used a piece of chipboard to stamp on that had stomp written on it that I got from a BBC TV show that I did.

No Frills – Mungo Jerry Sings Folk Songs was the title, which explains the simplicity of the recording.

“I was pleased with the result and plan to do another at some time”. 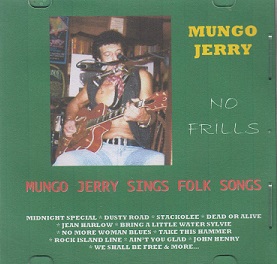