Ray conducted an interview in June 2020, during lockdown for a German magazine, and thought that it would be of interest to us all at ‘Mungo Jerry Magic’. He thought right!

Is it true that you composed In The Summertime back in 1968?

“I probably wrote it during the springtime of 1969, and came up with the melody in the evening. I was living in the maisonette that I bought from my dear friend Joe Rush who sadly passed away this year.

“We had seen a salmon pink Fender Stratocaster in a music shop in West London, it was seventy five pounds. Joe lent me the deposit so that I buy it on hire purchase. The guitar cost more than the three piece suit that I had bought for thirty nine guineas in the Feltham branch of Tescos supermarket.

“I was messing around on the guitar in the key of D major when the melody came into my head.

“The next day when I was at my desk in the Timex research laboratory where I was working at the time the melody surfaced again and as I was early for work that day I decided to write the text for the song.

“With little thought, I found that the lyric flowed immediately and without any alterations, I had written all of the verses. And that is why I always say that the physical side of the song, both words and music probably took about ten minutes to compose.”

Why did you and the band members prefer Mighty Man as the a-side of your first single?

“This song was written onstage whilst playing a gig at an R.A.F nurses venue in Swindon, Wiltshire. We were going down really great with the audience and the guys in the band asked me what we were going to play next?

“I had no idea, but as I had a harmonica harness around my neck which contained a C-blues harp, and a kazoo, I immediately started to bash out a rhythmic groove on the guitar. And for some reason or other the melodic hook on the kazoo.

“After twelve bars of this, I launched into the lyric which came immediately into my head. The crowd loved it, I did not even write down the text of the song.

“After that gig the song became a highlight at every gig that we subsequently performed at. And because it was such a popular item in the band’s repertoire, we thought that it would be the obvious choice for a single if we ever got the opportunity to record one.

“When we were invited by Barry Murray to record a couple of songs at the Pye Recording studios as a recording test. This, along with Peace in the Country, another of my compositions, was the song that we recorded.”

One day after the single was released, you already presented the song at a festival?

“In fact, if my memory serves me well, I did not play In the Summertime at the now legendary Hollywood Festival, but I certainly played Mighty Man. 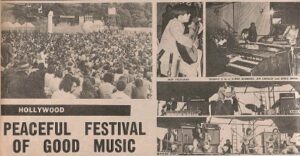 Do you still remember the performance at the Hollywood Music Festival?

“The shows that we performed on the scheduled day of the 23rd May, and the unscheduled performance will forever remain in my memory.

“It was a truly euphoric moment to see and hear around thirty five thousand audience members clapping along, banging on anything that they could find, to the groove and vibe of the music that we were delivering.

“The spectators seemed to hang on to every word that I spoke to the extent that when I said “take of your clothes”, many of them did so. In fact, me saying take off your clothes was my way of saying “dispense with all of your inhibitions”.

The press spoke of Mungomania. What memories have you from that time?

“The press, regardless of the subject, will always ‘glorify’ the observations that a journalist has written about solely to grab the attention of their potential readers.”

Did you keep your feet on the ground despite all the hustle and bustle or did you never get out of celebration?

“There was not a lot of time for me to think about what had happened. My head was probably ‘in the clouds’ for a long time. I had never before been on an aeroplane. Soon I found myself sitting on one whilst flying to Hamburg. The band was set to play their first overseas engagement.

“On my return, I sat next to Spencer Davis. The Spencer Davis Group had already clocked up a massive following and had hits with Keep on Running, and Somebody Help Me. They were both composed by the late Jackie Edwards. A guy that I had played guitar for on many gigs during the time that my band, at that particular time was called the Sweet and Sour Band.

“Spencer and I had a lot to speak about, and over the past fifty years have since crossed paths on a number of occasions.”

Do you also remember your first gig in Germany?

“That gig was not the best reception that we got on a German festival. The craziest audience reception that we experienced in Germany was a little later at The Aachen Festival. But what intrigued me in Hamburg was the fact that on the rear of the small black and white festival flyers was a messed about picture of my head.”

Up to that day, you were quite normal musicians. Then suddenly, you were on top and landed the hit of the year. Have friendships with other musicians also developed during this time?

“Well, I don’t know about the other guys that were in the band at the time. Because Colin Earl and Paul King tried to unsuccessfully hi-jack the Mungo Jerry name and oust me from the lineup. I subsequently became known as Mungo Jerry, artist and performer. And Ray Dorset, composer, producer. In answer to your question I would like to know,”what is normal?”

You are a blues musician and writing the happiest pop songs. How does that all fit together?

“I do not put up any barriers as to my regard to any musical genres whatsoever. If I can get into the vibe and groove of any style whatsoever. I would most certainly have a go at creating something in that particular ilk.”

When the big success with all the hype was over. You were a made man as the composer of the song. Are there still dreams left?

“First of all. Let me categorically make it clear. The recording success of Mungo Jerry was not in any way whatsoever built on hype. The worldwide success of this recording was a completely organic happening.”

If the first song that was released on record is the biggest hit of your career. Is it a curse or motivation?

You have to sing this song at every performance. Can you still listen to hit?

“As far as I am concerned, this is yet another inane question.”

What does In The Summertime mean to you 50 years after its huge success today?

“This song has brought pleasure, and extremely fond memories to literally millions of folks throughout the world. These folks now span five generations. The underlining sentiment of the song is primarily that of Love, Peace, Happiness, and the celebration of life.” 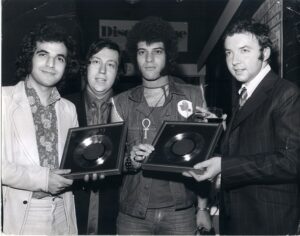