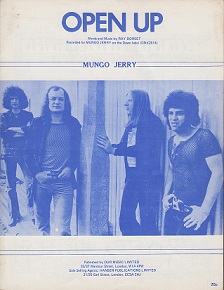 Open Up was Mungo Jerry’s fifth maxi-single and the first after the departure of pianist Colin Earl and banjo player, Paul King.

It was recorded with bass player John Godfrey and session musicians and was a different version to the one that was recorded for the forthcoming album, Boot Power.

Charting at number 21 in the singles chart in the spring of 1972, the maxi-single also included, I Don’t Wanna go Back To School, Going Back Home and the heavy sounding No Girl Reaction.

Whilst promoting the single, Mungo Jerry made an appearance on the popular television show, The Golden Shot, made all the more notable for Ray spraying his hair silver!

Tracks: Open Up, Going Back Home/I Don’t Wanna Go Back To School, No Girl Reaction.

Ray Dorset on Open Up…

“I was due to go in to hospital to have my tonsils removed but had to cancel this because of the problem in sorting out a new band and Barry,  thought that we should get a single out as soon as possible to keep the momentum going after the press announcement of the split.

I wrote Open Up in a hotel just north of London, it had a Doors influence and I had the idea to use the instrumental break from one of the Good Earth tracks.

Come On and Open Up…

Played at the wrong speed? It’s a 33 1/3 rpm maxi-single. Actually, it sounded better at that faster pace, but fact is that is a very good sound with a persistent build up and some of that old Jerry-type impact.

Both tracks on the top deck are very good indeed.

MUNGO JERRY : OPEN UP (Dawn)  Mungo get away from the raspberries for a more blues orientated approach. The first number is slower than the second. The guitars play rather loudly over a series of chord progressions.

The overall effect is mildly interesting.

Over the years, Ray has recorded many different versions of Open Up. My personal favourite being the one used on Boot Power.

The above version of Open Up was taken during Mungo Jerry’s appearance at the Brooklyn Bowl, New York, U.S.A in August 2013. Source Marc Viscel.

The more eagle-eyed among you will have noticed that Ray is backed by local musicians.

There are two brand new DVD’s – 24 Days. A Mungo Jerry documentary filmed during a tour of mainly Germany in 2016 and a live performance from the Bansko Jazz Festival.