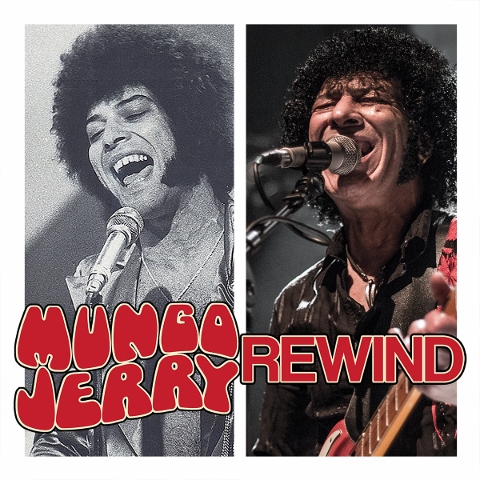 The Mungo Jerry album, Rewind was released, by Hypertension-Music , as part of a double album package, featuring a ‘Best Of’ on Disc 1, including a new version of Somebody Stole My Wife, and a brand new set of recordings by Ray and his band – Toby Hounsham (keyboards), Jon Playle (bass) and Bob White (drums). Amazon declared that it would be available on the 3rd of June, with a UK release on the 10th.

2016 the new release REWIND – a double CD which reflects an overview of Mungo Jerry’s total work on the first CD and a complete new view on the second CD.

The first compilation CD would not be complete without hits like In The Summertime, Lady Rose or Hello Nadine but it also contains some tracks which will be a surprise for many people – a rocky, bluesy Mungo Jerry with Snakebite or Motor Bikin’.

The second CD of ‘Rewind’ reflects the variety of Mungo Jerry’s music, opening with a lazy rock tune It Don’t Matter, and continuing with a classic blues track One More Night Without You and finishing with a waltz-like song The Old Apple Tree – all combined in the second disc of Rewind.

Rewind is a timeless album that shows Mungo Jerry as a songwriter, blues lover and also reflects a music and lifestyle that is and was important for more than just one generation of music lovers – the 70’s Hippie Culture”. 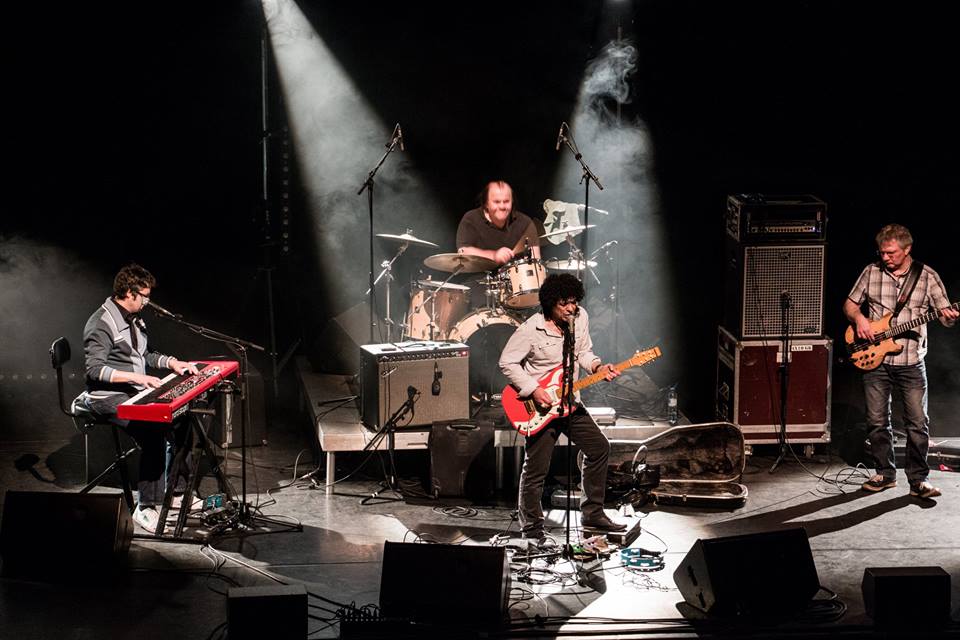 “I wrote most of the songs contained in the new recordings on this album while reminiscing on the preceding years prior to me recording the first Mungo Jerry album and doing the first gig under the Mungo Jerry name.

“This took place on the 23rd May, 1970 at the now legendary Hollywood Music Festival, me and the band performed there again on the following day and on both occasions we took the audience and the music press by complete surprise by going down an absolute storm with both, (In The Summertime, was first released on May 22nd, and was the first maxi-single in the world).

“I was also inspired by the experience that I gained on my travels and the people that I met for about three years after this.

“Subsequently I read a lot of books about writers and performers from Woody Guthrie to Irving Berlin, from Leadbelly (Huddie Leadbetter) to Elvis Presley and books about life and travels such as On The Road by Jack Kerouac, The Merry Pranksters by Ken Kesey and all kinds of other stuff such as Lives and Loves by Frank Harris and a lot of Herman Hesse books.

“I had also been influenced by underground publications that I had read in the late sixties and after the first hit when the office was at 37 Wardour Street in London many writers and performers came to visit and I often had chats with the late Mick Farren who was at that time a contributor to the International Times which was a forerunner to the alternative lifestyle, counter culture movement of that era.

“He was also the front man for The Social Deviants, the band that was on the same bill as mine at the Christmas Ball at Oxford University in 1968.

“The gig was a life changer for me, we were booked to play for thirty pounds and I was in need of the money, however the bass player and drummer left the band soon before the gig and I decided to do it with Joe Rush on double bass and Colin Earl on piano.

“I played some Leadbelly, Woody Guthrie and Lonnie Donegan songs and made a few up on the spot and the University students loved it and asked us to play again after Keef Hartley had done his spot.

“We finally stopped at 3.45 a.m when the power was turned off!

“This gig was the precursor to what developed into the initial “Mungo-sound”.

“All of the above got me into a lot of philosophising about life in general and a lot about performing and performers and artists themselves and I developed many ideas of my own about this.

“In the days of my pre-teens I was immersed in rock’n roll and skiffle and because I seemed to be running out of repertoire for the band that I was in when I was about fifteen or sixteen years old I started to write songs that I could perform live with the band, and I wrote in the style of many different genres but the feel of the songs and the recordings, groove, vibe and lyrically on this new album were inspired by me being exposed to the British blues boom and in particular the advent of the psychedelic era as the listener will no doubt recognise”.

Liverpool Sound and Vision have also reviewed Rewind, giving it a glowing endorsement. Click on the link below to check it out.

“Mungo Jerry is on the same bill as the big names of pop. He’s noticeable from afar, with his big sideburns!

“Associated to acoustic music, his voice sounds like, at certain moments, T. Rex.

“A voluntarily simple music, based neither on electrical nor powerful drums, which shows in evidence, influences such as skiffle, folk, jug, blues, rockabilly and rock and roll.

“In this double CD (26 tracks, 8 page booklet), CD-1 reunites all the hits, charming rocks(Hello Nadine, Heavy Foot Stomp), others more glam-rock (All that a Woman Should Be, Snakebite), the rare Motor Bikin’ on which we can hear a Harley Davidson engine.

“On the last track of CD-1, on Goodtime On Your Mind, Ray Dorset lists some of the heroes of Rock, from all periods and styles, ending with himself.

…thanks to JJ for sending, and translating this one. 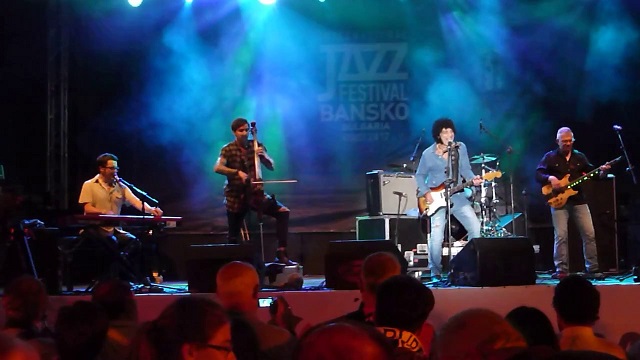 In case you missed it, Paul Jones played the new version of In The Summertime to open up his Radio 2 R’n’B show last night, commenting that it was the new one (although us fans would have worked that one out anyway), and said a few nice words about REWIND afterwards, mentioning the new material on the second disc.

“People of a certain age will always have a soft spot for Mungo Jerry. Their biggest and best-known song, In The Summertime was the soundtrack to the summer of 1970; the fact that it landed in the shops in 33rd rpm ‘maxi single’ format was tremendously hi-tech for the time.

“We felt particularly proud of its chart-topping success at our local school, where MJ mainman Ray Dorset’s mother worked as a dinner lady.

It’s tempting to call Mungo Jerry one-hit wonders but as the first disc of this two-CD set proves, this is absolutely not the case.

Kicking off with a vibrant retake of In the Summertime. It contains freshened-up versions of forgotten goodies that immediately sound comfortingly familiar; Lady Rose, Alright, Alright Alright and Baby Jump, to name but three.

This revisiting-past-glories malarkey is fraught with pitfalls but Dorset is on skiffle-tastic form. He tackles his old work with a lively relish. His trademark utterances (‘Chi-chi-chi…Uhh! Choo-choo-choo..ahh!) and comb-and-paper Don Partridge-isms remaining blissfully intact.

The second CD comprises nine all-new tracks and is no slouch either. I’ll Be a Hippy ‘Til I Die offers a serious dose of mutant ZZ Top rocking; the jittery I Only Had a Dollar is prime-time junkshop Elvis; the loose-limbed Going Down To Mexico evokes visions of Lonnie Donegan in a sombrero.

Liverpool Sound and Vision have reviewed the new Mungo Jerry double album, Rewind and given it the thumbs up. Click the link below to read the review. 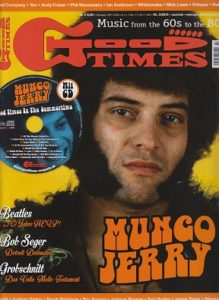 Almost in tandem with the Rewind album, Good Times magazine in Germany ran a major feature on Mungo Jerry and included a free CD of old favourites. 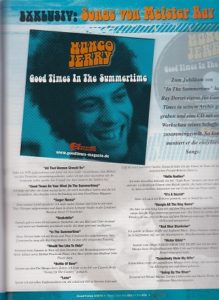 “What can I say, Mungo Jerry were one of the finest bands around in the early 70’s, so many hits, so many inventive good songs and styles.

“And now in 2016 Ray Dorset aka Mungo Jerry has returned to those roots and more. I won’t bother you with an in depth run down of each song, any one could be your favourite and you will return to the new CD again and again I’m sure.

“The 2nd bonus CD is Ray Dorset selecting some of his favourite hits and a selection of album songs from 1975 to 2013. Have you lost track with Mungo Jerry and want to catch up? Then REWIND and get ready to rock”!

“Very good double CD with a few surprises…love it”!

“All the hits and more, having worked with this band several times over the years, I can honestly say that the hits CD brings back some great memories , the power and performance never let anyone down.

“These guys can Rock!  The new CD is right up the Mungo Jerry street with some great new songs that you will be tapping your foot to.

“A great package for the money, old and new. buy it and enjoy it!”